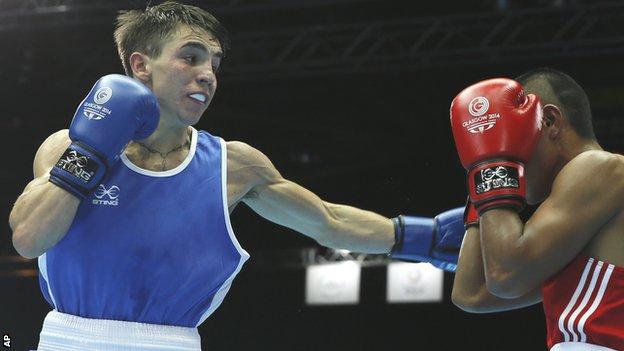 The Olympic bronze medallist was bleeding heavily from a cut in the third round after a clash of heads.

Male boxers are not wearing headguards at the Commonwealth Games for the first time in 32 years.

"Cuts are going to be dangerous when you turn professional so you're better off learning now," said Conlan.

Experts claim it is safer for boxers without headguards, with research finding that the rate of concussion with them on was 0.38% and 0.17% without.

The 22-year-old Belfast fighter added: "Boxing is just going to have to get used to it."

Conlan continued after treatment and eased to a unanimous victory.

"I was worried as I thought it was a eye cut - I just felt a trickle and couldn't see but once I knew it was the head it was no problem," said Conlan.

He is among the favourites to win bantamweight gold and he is determined to make up for an early exit in Delhi four years ago.

"I was just happy to get the ring-rust off as it was my first time in the ring since March," added Conlan.

"Delhi was a let-down for me and I remember crying at the airport on the way home.

"I won a bronze medal at the 2012 Olympics, a silver at last year's Europeans and now I want gold at the Commonwealths."

Conlan is through to the last 16 while fellow Northern Ireland boxers Steven Donnelly (welterweight), Ruairi Dalton (flyweight) and Sean McGlinchey (light heavy) are also in action on Friday.