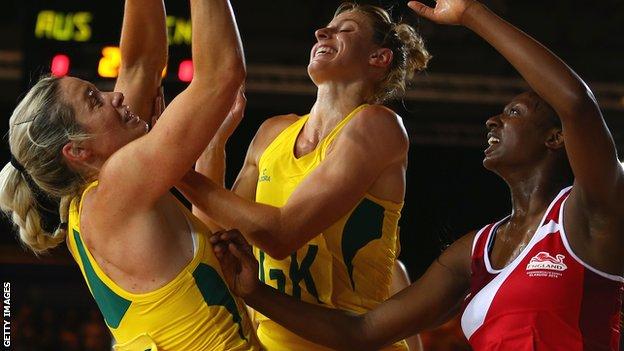 England, who won their first series against Australia last year, were 16-10 ahead after the opening quarter of their epic Pool B match in Glasgow.

Australia took the second to trail only 27-26 at half-time but England's lead increased as they won the third 12-10. The lead frequently changed in a tense finale and Australia scored a decisive point with only seconds remaining.

In the final minute of England's gripping encounter with Australia, prolific goal shooter Jo Harten had a chance to secure victory but her effort rolled around the rim and stayed out.

After Australia seized possession, counterpart Caitlin Bassett swiftly netted and there was no time for England to respond.

England play the third of their five group fixtures on Sunday when South Africa provide the opposition.

The top two from each pool progress to the semi-finals, and were England to finish second they would be likely meet New Zealand, who thrashed Scotland 71-14 later on Saturday.

The Kiwis are aiming to win their third consecutive Commonwealth Games title.