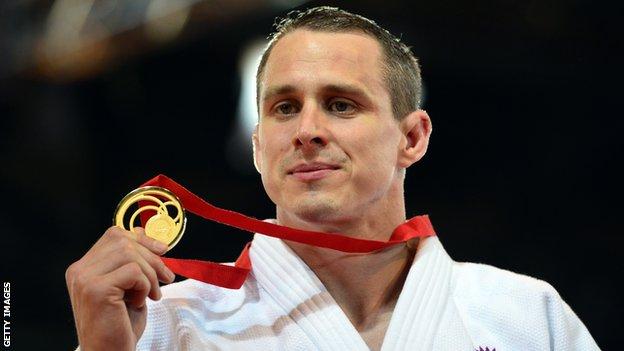 Burton's was one of three gold medals on Saturday as the host nation sparkled at the SECC.

"It is just a sense of relief at the moment. I guess tomorrow the excitement and pride will come," said the 35-year-old following his victory.

Judo has accounted for six of Team Scotland's 11 gold medals in the first three days of competition.

Burton beat Shah Hussain Shah of Pakistan to secure gold, holding his opponent down and forcing a submission.

"I was in the warm-up room, trying to stay as focused as I could and just caught the back end of the fight," said Burton. "She will be massively disappointed, because she came here for gold."

Adlington secured victory over England's Jodie Myers in the final of the women's +78kg final.

"The crowd were amazing, to come away with the win is fantastic," said the Scot.

"It is the first time I have fought since February, so to come back here and win gold hopefully stands me in good stead for the Olympic qualifiers later this year."

Sherrington capped a memorable evening for the host nation with gold in the +100kg final against Ruan Snyman of South Africa.

Royal Marine Sherrington went an early waza-ari up and then threw Snyman for two waza-ari to take ippon before celebrating by saluting all four sides of the SECC.