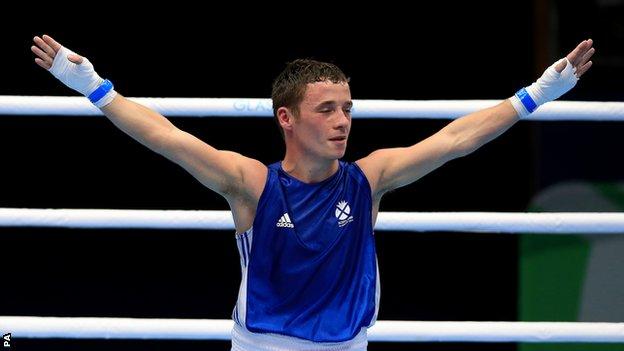 Scottish flyweight Reece McFadden is through to the quarter-finals at the Commonwealth Games after seeing off Charlie Edwards.

The Motherwell teenager earned a unanimous points decision over the English fighter, with Edwards claiming McFadden was helped in his "backyard".

However, McFadden said he was confident of beating anyone on his current form.

"I am the fittest I have ever been in my life and I am ready for a gold medal," he said.

McFadden, who defeated world number one Andrew Selby on Friday, explained why he was proving successful in the ring.

"I knew I beat those two boys by them looking away. When my eyes were constantly on them they were looking away, looking at the referee, not wanting to know.

"That's when they are beat. I have noticed that with guys who have beat me or given me my toughest fight, they look at me square on, right at me.

"Those two boys didn't do that. But it doesn't matter if you stare at my eyes, I am still going to beat you anyway because I am the fittest I have ever been in my life and I am ready for a gold medal."

An aggrieved Edwards felt he did enough to win the fight and progress to the last eight.

"It is what you expect. Now he is the golden boy," said the Croydon fighter.

"I am not one who says I got robbed but I really thought I won it, I thought I did enough but that's the way it goes, we are in Scotland.

"I thought I won but that's the way it goes, it is boxing. You get that all over the world, wherever you go, in everyone's backyard they (local boxer) always get a bit of help.

"But I am a good sportsman. Good luck to him."