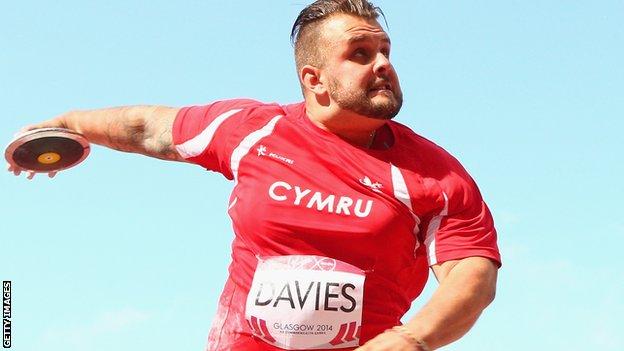 Team Wales captain Aled Sion Davies admits he was disappointed to have won only a Commonwealth Games silver in the F42/F44 discus final.

The Paralympic and double World champion had been hoping to win Wales' third gold of the Games.

But a best throw of 46.83m was not good enough for Davies, with England's Dan Greaves winning gold.

"I'm trying to look at the positives but I'm a bit gutted," Davies said.

"It's not the colour I wanted. But I'm sure in time I will appreciate it."

But Greaves, who is in the F44 category for athletes with less severe impairments, responded in the third round with 59.21 and 1,023 points.

"I knew when I took the lead it wasn't going to be enough because I know Dan had a big throw in him," Davies added.

"He's been throwing well over the past couple of weeks and I knew I had to pull something big out of the tank.

"Take nothing away from him, as tough as the competition was, I put in a performance I'm fairly happy with.

"I know I could have thrown a bit further but it's just what happens in these major championships.

"I've got to look at positives now and remember I'm still young and Dan's at the pinnacle of his career."

Davies' silver at Hampden Park was Wales' 20th medal in Glasgow, one more than the total achieved in Delhi four years ago.

The Bridgend athlete had been one of Wales' big gold medal hopes in Glasgow and had also been appointed captain of a 230-strong contingent.

But Davies insists he did not feel the weight of expectation following a successful weekend for Team Wales.

"Wales has been delivering some phenomenal performances and I couldn't be more proud," Davies added.

"I just wanted to be a part of that and I suppose the silver will do for now and I'm hoping the rest of guys go on and keep winning the medals.

"I didn't feel the pressure. I had a great team supporting me and there's a great cohesion in the camp.

"Everyone's supporting everyone and it was not like 'Aled, you have to win this.'

"Of course being a leader of Team Wales I wanted to lead by example and bring home the gold but silver is going to have to do for today."