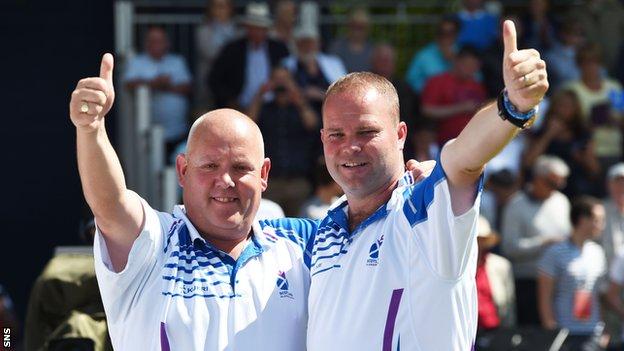 The Scots proved too strong for Malaysia, easing to a 20-3 victory in the final.

Scotland won gold in the event in Melbourne 2006 but came home from Delhi empty-handed four years ago.

"This is just fantastic. I have won two golds before but this one tops the lot," said Marshall.

The pair shone in front of a home crowd, which made the victory all the sweeter.

"Playing in your own back yard, in front of your own fans - you just can't beat it," added Marshall.

"It's definitely one of the highlights of my career. That is our 12th gold medal of the games for Team Scotland, so that is another record broken, which is fantastic.

"We got off to a good start. Paul was phenomenal from start to finish and that makes my job a lot easier.

"Through the whole tournament we've been fantastic, it's just a joy to get another gold medal."

Foster also won Commonwealth gold in the men's pairs with Marshall in Melbourne in 2006.

And he was delighted to help the host nation surpass their best ever tally of gold medals at a Commonwealth Games.

"I said in Melbourne nothing would ever beat it, but this has topped it by far," Foster told BBC Scotland.

"We got told last night we were sitting on 11 golds and we said it would be great if we got the 12th. It's fantastic for Team Scotland.

"My plan was to help Alex as much as I can and get off to a great start. Everybody knows the bowls he played yesterday was unbelievable, he got us to the final, so I just wanted to put a big performance in, not just for myself but for Alex, and I managed to do that today."