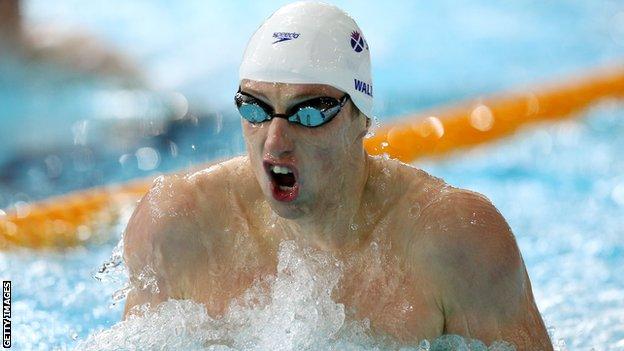 Scotland's Daniel Wallace added silver to his gold medal with a barnstorming finish to the 200m individual medley.

Wallace, 21, came from last to finish second behind Australia's Daniel Tranter in a pulsating race at Tollcross.

The Scot had already won gold in the men's 400m individual medley and silver as part of Scotland men's 4x200m freestyle relay team.

"This is the best competition I've been to in my life," he said.

Wallace added that it would be difficult to top Glasgow 2014.

The crowd were amazing, they stepped their game up too - it's something I will never forget

"It feels phenomenal to have won another medal," he went on.

"I didn't expect to do that well last week, but after what happened I knew I had it in me to get a medal, and I'm just so happy I did that today.

"Wearing the kilt was a bit of a team decision. With us being the home nation, we wanted to show our pride off. It was a little special thing for the fans. I hope they enjoyed it.

"Performance-wise I think I did that and the emotions I had when I was walking out were amazing. The crowd were amazing, they stepped their game up too. It's something I will never forget."