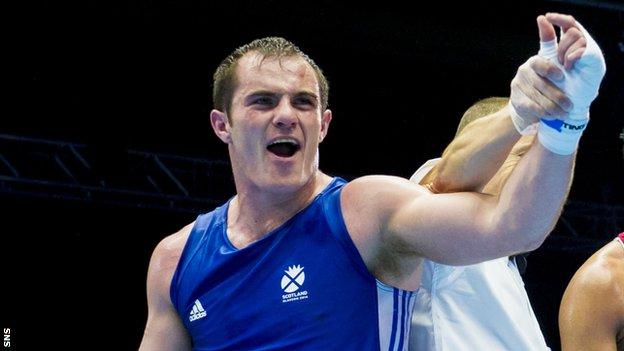 Scotland will be represented in the semi-finals of four of the 10 men's boxing weight divisions at the Commonwealth Games on Friday.

Glasgow's Joe Ham and Motherwell's Aqeel Ahmed, however, both lost their last-eight bouts.

Ham, a favourite of the local crowd, struggled to pin down 21-year-old Qais Ashfaq from England.

The Leeds bantamweight (56kg) has won English and British amateur titles and is a contender for the Commonwealth title, though Northern Ireland's Michael Conlan and Sean McGoldrick of Wales also impressed in their fights.

The next fight is on Friday night, a semi-final in the Hydro - it's going to be absolutely electric

Ham told BBC Scotland: "It wasn't my day, he was just awkward. He was on the back foot and running away and it's hard to pin somebody like that down.

"He knew he wouldn't stand and fight. He knew he had to be on his toes and, to be fair to him, he did it for three rounds.

"He's known throughout Britain for having good footwork.

"I'll have a wee break now and see what happens. It wasn't my time today but all the best to the rest of the boys."

Ahmed, 22, was knocked down by a fierce left hook in the second round of his light-flyweight (49kg) fight with the tenacious Indian Devendro Laishram, a London 2012 Olympian who beat the world champion Madushan Gamage in the last 16.

The Scot stood his ground and fought gamely for the three rounds but Laishram looked to have the power of a fighter in a heavier division.

"It was that big shot that secured the win for him," said Ahmed.

"He's a big puncher. I'll need to look back at it but it was a good shot. The better man won but I'll come back stronger."

Between those defeats Glasgow's Lavelle had the home fans on their feet with a hard-fought, deserved win over Singh, aged 19.

The Hayfield Amateur Boxing Club fighter had to have his eye treated after the 91kg bout.

Lavelle sustained further damage to it after it was cut in a clash of heads in his first bout.

"Any cut is not good for going into another fight but I am not going to let it bother me and I'll get the job done," said the 23-year-old joiner.

"He was being nasty. He was actually trying to open up the cut, if you ask me, so it got a bit messy at times.

"It wasn't good from him and I am so pleased I beat him.

"The corner said to me to dip and bring the hooks over and I caught him with the cleaner punches.

"He started to tire and I've got the heart of a lion. You'll not stop me.

"The next fight is on Friday night, a semi-final in the Hydro. It's going to be absolutely electric."