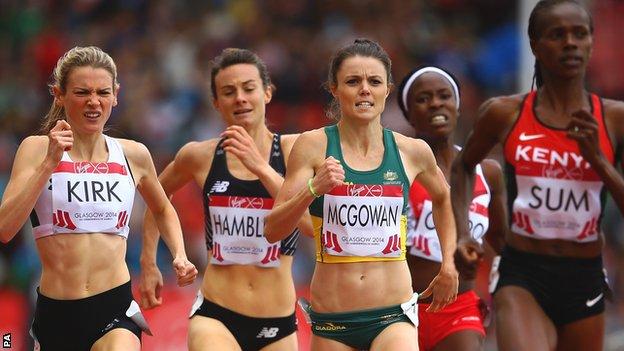 Northern Ireland's Katie Kirk is through to the Commonwealth Games 800m semi-finals after an impressive run in Wednesday's heats at Hampden Park.

The Holywood athlete stormed down the straight to finish second in her heat in 2:03.00.

Leon Reid made the 200m semi-finals after coming third in his heat while Jason Harvey was fifth in his 400m hurdles heat and failed to progress.

Martin McHugh is through to the quarter-finals of the bowls singles.

Whitehead man McHugh, 41, eased to a 21-10 victory over Leonard Callus of Malta to secure a place in the last eight.

The men's fours have also progressed to the last eight of their competition after drawing with England on Wednesday.

The women's triples team beat Papua New Guinea 26-15 in their final pool game but England's win over Scotland means they are out of the competition.

However, the women's pair of Barbara Cameron and Mandy Cunningham did progress to the knockout stages despite their morning 23-15 defeat by Australian, thanks to a later 19-13 win over Papua New Guinea.

Limavady wrestler Hugh McCloskey missed out on a bronze medal in the men's freestyle 97kg category as he was beaten by New Zealander Sam Belkin 4-0.

Earlier on Wednesday, McCloskey, 22, lost his quarter-final against Canada's Arjun Gill but was then handed the bronze medal contest when his repechage opponent pulled out of the remainder of the competition.

In netball, Northern Ireland have guaranteed themselves a top-eight finish in Glasgow after an impressive 37-32 win over the hosts on Wednesday.

Northern Ireland's win, which avenged the World Championship qualifiers defeat by the Scots earlier this year, sets up seventh-eight play-off game against Wales on Friday morning.

In the athletics session, Kirk produced a superb run to qualify automatically for the 800m semi-finals as she produced a strong closing 100m metres to finish second in her heat.

Kenya's World Champion Eunice Jepkoech Sum won the heat in 2:02.36 with Kirk pipping Australia's Brittany McGowan for second and England's Marilyn Okoro squeezing into the semi-finals on a fastest loser's spot after taking fifth in 2:03.90.

"I never eased up as my dad [Coach Mark Kirk] has always told me to run to the line," said a delighted Kirk.

Sprinter Reid progressed to the 200m semi-finals as a fastest loser after finishing third in his heat in 20.97 - .35secs outside his personal best.

"I ran really well for the most of the race but some great athletes just slipped away from me towards the end.

"I might not yet be fully recovered from my accident a few weeks ago in Belgium where I collided with another athlete and was knocked out for a while.

"As a result I spent four days in hospital and lost a total of three weeks training."

However, hurdler Harvey bowed out as an ankle injury sustained two weeks ago meant that he will unable to get near to his personal best of 50.13 as he clocked 52.06 to finish fifth in his heat.

The Northern Ireland man would have needed to have posted a time of 49.80 to have earned a fastest loser's spot for the final.

"Frustrating way to run but glad I did considering I wasn't walking last week," Harvey said on Twitter.

Harvey will now concentrate on getting himself fully fit for the European Championships in two weeks.

In the evening athletics session, Kerry O'Flaherty ran well in the 3,000m steeplechase final to place 11th in 9:55.94 which was the third fastest time of her career.

Tony Murphy and Tony Stephenson have made the last 16 in the men's badminton singles thanks to victories at the Emirates Arena.

Sinead Chambers is out of the women's singles at the last 32 stage after losing 2-0 to Indian Thulasi and the Northern Irishwoman and her brother Ciaran exited from the mixed doubles as they were beaten 21-13 21-12 by Canadian duo Derrick NG and Phyllis Chan.

Tony Murphy and Alannah Stephenson also bowed out of the mixed doubles after losing 21-12 21-13 against England's Chris Adcock and Gabrielle Adcock but Tony Stephenson and Caroline Black have qualified for the last 16 after a 21-19 21-16 win over Jamaican pair Gareth Henry and Geordine Henry.

Ashley Robinson and Ashley Givan have progressed to the third round in table tennis mixed doubles but Peter Graham and Emma Ludlow were defeated in the second round.

Given and Amanda Mogey both won their first-round matches in the women's singles before exiting in the last 32.

In squash, Madeline Perry and Michael Craig were beaten 11-3 11-7 by Australia's Rachael Grinham and David Palmer in their mixed doubles pool game and now must beat the Caymen Islands to qualify for the last 16.

In gymnastics, Nicole Mawhinney finished a very creditable 17th in the women's all-round final after qualifying in 21st position.