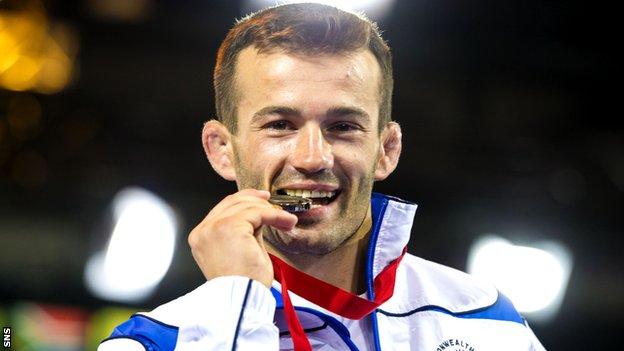 The 36-year-old wrestler, who was born in Gorodiste in Moldova, beat Adam Vella of Malta in the 61kg freestyle bronze medal contest.

"The idea was to get the business done as quickly as possible. The plan worked," said Etko.

Etko, from Oldmeldrum, Aberdeenshire, missed out on the chance to compete at Manchester in 2002 as he waited for a UK passport.

However, he made his first appearance at the Games in Dehli four years ago where he finished fifth in the 60kg category.

En route to his bronze medal in Glasgow, Etko beat Mike Asselstine of Canada in the last 16.

I can't put it into words, I'm just a lucky person

He then overcame England's George Ramm in the quarters, before losing out to David Tremblay of Canada.

That saw him drop into the bronze medal contest where he prevented Vella claiming a first wrestling medal for Malta with a terrific performance.

"I can't put it into words, I'm just a lucky person," said a delighted Etko.

"It almost didn't happen for me because I was in a coaching role, and I probably made the best decision in the world in terms of a competitor to come out and to compete because it was a home crowd and probably my last opportunity as an athlete.

"In a sporting life you probably lose more than you win, and this is one of those times I'm proud I've come away with something."