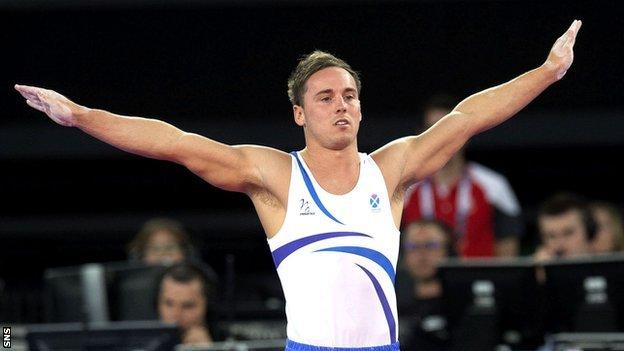 Daniel Keatings picked up his third medal of the Games, winning gold in the pommel after picking up silver in the team, and individual all-round, with team-mate Daniel Purvis picking up bronze in the rings.

Wrestling medals appear to be like buses for Scotland as, after waiting 16 years for Viorel Etko's bronze on day seven, Alex Gladkov provided another - in the 65kg category - on day eight.

And there could be more success to come at Hampden after Eilidh Child won silver in the 400m hurdles.

After breaking their gold medal record on Monday and surpassing their overall medal record for a Commonwealth Games on Tuesday, Scotland broke the 40-medal barrier on Thursday courtesy of Gladkov's bronze. Can the host nation dare dream of 50 medals?

The Games may be drawing towards a close, but Scotland still have opportunities to add even more medals to their record-breaking tally.

Lynsey Sharp will be Scotland's biggest hope at Hampden on Friday evening, where she will hope to add a Commonwealth title to her European one.

After a successful heat on Wednesday where she cruised comfortably in to second place with automatic qualification just behind England's Jenny Meadows, the Scot toiled in her semi-final and qualified as a fastest runner-up.

However, after recently dipping under the 2 minutes mark with a time of 1.59.67 during the Diamond League in Lausanne, there's no denying Sharp's quality.

Following his strong 21-15 victory against Australia's Aron Sheriff 21-15 he looks in good form to take the title.

Scotland's fours team will also be competing for the gold medal, they take on England in the final at 1245.

After Daniel Keatings' triumph on the pommel horse on Thursday, Scotland's gymnasts will be on the hunt for more medals on Friday.

Baines and Daniel Purvis will also be in the final of the parallel bars. It promises to be quite an afternoon.

Keep your eye on

Through in Edinburgh, Grace Reid is in action in the diving.

In badminton, Kieran Merrilees - who has yet to drop a game - takes on England's Rajiv Ouseph in the men's singles quarter-finals and, in the women's singles, Kirsty Gilmour faces Michelle Chan of New Zealand at the same stage.