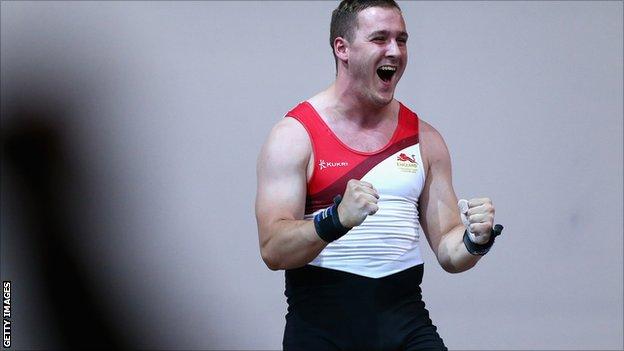 England's Ben Watson said he was "absolutely ecstatic" after winning a Commonwealth Games bronze medal in weightlifting's 105kg Group A.

"I got the medal the hard way but when the guy from Barbados missed all three of his lifts I was buzzing. It was a great moment."

Watson, who is from the St Birinus Club in Didcot, led after the snatch after successfully lifting 157kg.

But despite being cheered on by an enthusiastic crowd, he could not compete with Katoatau or Chalaev in the clean and jerk - where the weight is lifted in two movements.

"I can't be disappointed because I didn't really expect a medal," added Watson.

"For me these games were about having a good experience, so to come away with a medal will give me confidence for four years' time."

He added: "It's the best feeling, the whole set up is brilliant. Every second out there was just awesome and the medal to cap it off was awesome. I could not stop smiling."