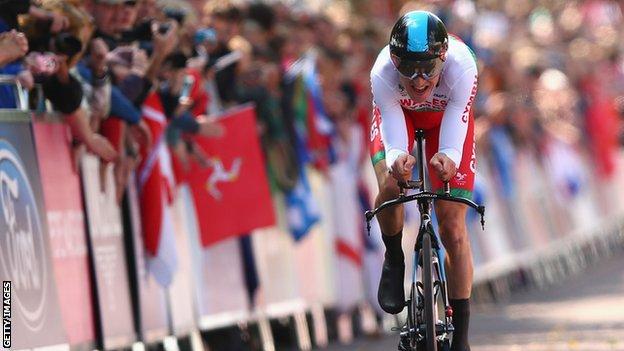 The 28-year-old competed in the time trial only four days after finishing the Tour de France and will go again in Sunday's road race.

"But it's a super strong field and every nation has good riders and with the road race as well a lot of tactics come into play.

"A lot can happen but we're confident. Just like the last month [on the Tour de France] I'll just get on with it, smash it and see what happens."

It was double-Olympic champion Thomas's second Commonwealth Games medal after third place in the points race on the track in Melbourne 2006.

"Back then I was 19 and on the track and unsure what was going to happen. Today was a similar thing," Thomas added.

"I knew I'd suffer, but whether I'd be able to ride fast we were going to have to see.

"I didn't have any time checks on the road, though, as my radio wasn't working.

"I'm kind of happy in a way that I lost 14 seconds not less because then I would have been kicking myself.

"You kind of analyse every corner then but at least 14 seconds is a decent sort of margin.

Glasgow was only the second time Thomas has competed at the Commonwealth Games after he pulled out of Delhi 2010 because of health concerns.

Thomas, who has represented Team GB at two Olympic Games, was proud to wear Welsh colours once again.

And the Cardiff-born rider was also ready to share his knowledge with cyclists from some of the Commonwealth's smaller nations and territories.

"The last time it was in Melbourne and it was just great to come here wearing the Welsh kit and different faces.

"Darren Tudor, he's the [Wales cycling team] manager and he was my coach when I was a junior at 17 or 18.

"I started my whole career with him and it was great to be amongst all the Welsh.

"It was great to win a medal but it's also good to see the other nations, the smaller nations.

"We were riding on the circuit the other day and they were coming up to me wanting a picture with me and stuff.

"It's kind of strange to see where they've come from. I'm so privileged to have been born where I was born and had the opportunities that I've had.

"It's great to see the other guys and pass on a few tips and help out."