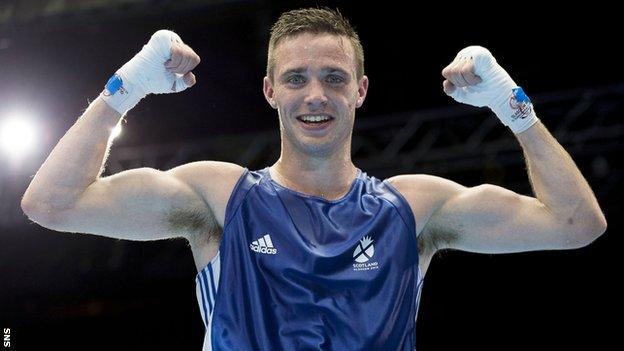 Taylor beat England's Samuel Maxwell in the 64kg event, while Flynn came through a scrappy contest with Welshman Joseph Cordina in the 60kg category.

Flynn lost the opening round but finished the stronger, while Taylor's win was also tight.

Countrymen Reece McFadden (52kg) and Stephen Lavelle (91kg) had to settled for bronze medals after losses.

"I felt perfect in there," said Motherwell's McFadden. "I'm scunnered I'm not in the final."

Taylor won a silver medal at lightweight in the Delhi Games four years ago and his clash with Maxwell was a cut above most other fights at the SECC in Glasgow.

"It was far from easy," Taylor said after his victory. "That could easily have been a split decision.

"I won the first round, maybe just edged the second, but he definitely got the last round.

"I've been dreaming of this moment for four years and I can't wait to win a gold medal in front of the Scottish fans.

"The Olympics have been and gone and I've been looking forward since then. I've put all my losses right and my form has been improving all the time."