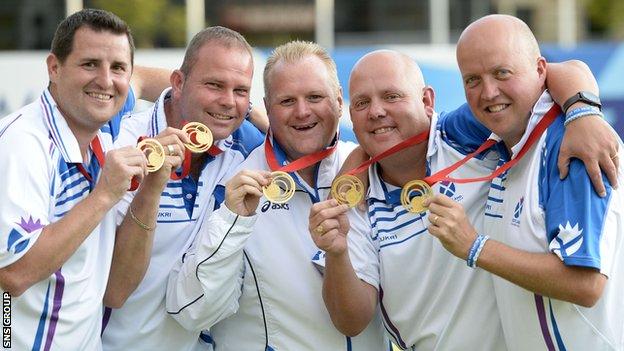 Scotland will break through 50 Commonwealth Games medals on Saturday.

It's worth saying that again... An amazing 51 medals are guaranteed, since the tally currently stands at 49 and there are two boxers into their respective finals.

The previous record for medals was 33, established at the Edinburgh Games of 1986.

Scotland's lawn bowlers may be excused for being a bit bleary-eyed on Saturday morning since Darren Burnett won gold in the singles after team-mates David Peacock, Neil Speirs, Paul Foster and Alex Marshall had prevailed in the fours.

Friday brought more cheer in the gymnastics as Dan Purvis turned in a wonderful performance to strike gold on the parallel bars, his third medal of the Games.

Usain Bolt may finally have made an appearance at Hampden but by far the biggest roar of the evening was reserved for Lynsey Sharp as she put her injury worries and a bout of illness behind her to run her heart out and take silver in the 800m.

Possible gold medals for Scotland: Boxer Josh Taylor is a big favourite to go one better than the silver he picked up in Delhi four years ago.

As the Games enter the penultimate day, two of Scotland's boxing stars are still standing.

On the closing night of action at Hampden before Kylie & co take over for Sunday's closing ceremony, Chris O'Hare will be in the 1500m final, having recently set a new Scottish record of three minutes 35:06 seconds.

The 23-year-old, who will run in the European Championships in Zurich next month, will need to be at his very best if he is to make the podium.

Kris Robertson, Jamie Bowie, Greg Louden and Grant Plenderleith will run in the 4 x 400m relay final, having gone through as a fastest loser.

Josh Taylor and Charlie Flynn will fight for gold medals.

Taylor, 23, was a silver medallist in Delhi four years ago has been the most impressive of the home boxers and he will take on Junias Jonas of Namibia in the 64kg division.

Lightweight Flynn, 20, showed great courage to get through his semi-final, and will need to recover quickly as he prepares to meet Northern Ireland's Joe Fitzpatrick.

Kirsty Gilmour will meet Jing Yi Tee of Malaysia for a place in Sunday's singles final.

Robert Blair and Imogen Bankier take on England's Chris Adcock and Gabrielle Adcock in the semi-final of the mixed doubles event. Adcock and Bankier played together at the Olympics, so they should know each other well.

Grace Reid goes in her preferred 3m springboard event, having finished fifth in the 1m event on Friday.

Micky Yule is Scotland's only representative and will take part in the men's heavyweight category from 1800 BST.