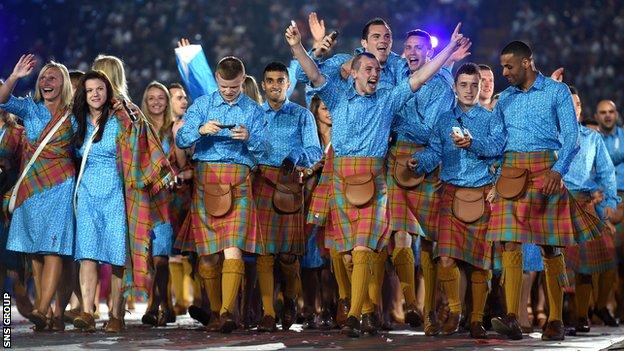 As thousands of athletes and fans leave Glasgow, I feel like a teenage boy whose sweetheart is emigrating.

I suspect that in the coming weeks I'll be found sulking around the Commonwealth Games venues, surviving on memories.

The 4,500 athletes will be scattered around the globe and the 15,000-strong army of Clydesiders will return to Civvy Street.

There will be no more Cameroonians playing their drums in the east end: the normal rhythm of the city will resume.

Police officers won't always say hello, pot holes will once again take weeks to be mended and fewer visitors will need a hand with directions.

So it's with a heavy heart that I watch these marvellous guests heading through the departure gate at Glasgow Airport. I really don't want the party to end.

For the past eight months I've had the privilege of meeting many of the Scottish athletes who were hoping to compete.

Although some were full-time athletes, the majority were part-time amateurs trying to juggle work or study commitments with the rigours of making the qualifying standard for selection. None was rich.

Over and over, the athletes told me that this was a once-in-a-lifetime opportunity to represent their country at a home Games, and that they were desperate to play their part.

Some, like weightlifter Craig Carfray, cyclist Ben Peacock and boxer Conor Law, missed out by fractions.

Many, though, were part of their sports' elite group and satisfied the stiff criteria set down by Commonwealth Games Scotland.

To see these same athletes attend media conferences with their place in Team Scotland confirmed was wonderful, but nothing compared to witnessing the excitement on their faces as they entered Celtic Park to a wall of noise in the opening ceremony.

Here, at last, was recognition of the sacrifice they had made for their sport - for the time they have missed with friends and family, for the lack of earnings in careers otherwise pursued, for the physical strain on their minds and bodies.

I was incredibly lucky in my role leading up to the Games. I was able to spend hours filming and speaking to boxers, weightlifters, cyclists, netballers, judoka, squash and badminton players giving their all for Scotland.

I saw friends pushing one another on to hit harder, move faster, lift more and I caught glimpses of the torment of trying to be your country's best.

When their big moment came to perform at Glasgow 2014 there were, of course, mixed fortunes for the athletes I'd met in the build-up.

I interviewed boxer Lewis Benson moments after he walked from the ring, his Games ended after nine minutes of action by a damaging left hook. That he stopped to speak was impressive; that he returned to the arena to roar on his team-mates says everything about his character.

It didn't work out for weightlifter Peter Kirkbride, the talisman of the Scottish scene after his silver medal in Delhi, but he too was sporting in the aftermath.

Judo player Connie Ramsay was in tears when her chances of gold disappeared at the SECC but she came back out to nail her bronze medal contest.

Kirsty Gilmour won a silver medal in the badminton women's singles on the final day of the Games and Charlie Flynn is now a Commonwealth boxing champion.

Their personalities may differ but common themes underpin their success - a camaraderie with their training partners, a willingness to learn, determination, an ability to withstand pain, a desire to win, a calmness under pressure, a positive mindset, and a lot of skill.

Their medal-winning feats and the contribution of the other 308 athletes, whether they helped Scotland to the record-breaking tally of 53 or not, should be lauded long after these Games.

They have shown what they can achieve through sport and what sport can do, for Team Scotland has boosted civic pride and made a nation feel good about itself.

When the schools go back and the football season returns, we should remember that in gyms, rings and pools, on courts, tracks, pitches, greens, roads, apparatus and platforms, there are athletes striving to create future moments for us all to enjoy.

They deserve the country's support.