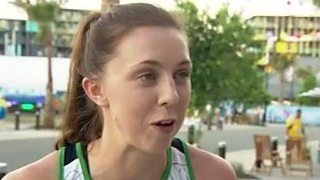 Toner hopes Games can be 'stepping stone' for NI netballers

Northern Ireland netball player Fionnuala Toner hopes the Commonwealth Games will prove to be "another stepping stone" for the team who have improved their ranking from 19th in the world to eighth in the space of 10 years.

Toner tells BBC Sport NI's Gavin Andrews that she is "really excited" for room-mate and team-mate Caroline O'Hanlon, who has been named as Northern Ireland's flag bearer for the opening ceremony on Wednesday.