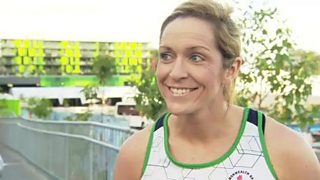 Northern Ireland netball captain Caroline O'Hanlon speaks of her pride after being named as flagbearer for Wednesday's Commonwealth Games opening ceremony on the Gold Coast.

"I was shocked to be honest but very, very proud," said the 33-year-old. "In Glasgow, netball was a new addition to the Northern Ireland team and this shows how far we have come as a team."