England won a flurry of gold medals on day one of Gold Coast 2018, with Max Whitlock helping the artistic gymnastics team to victory.

Swimmer Aimee Willmott made it three golds in a matter of minutes as she won the 400m individual medley.

Further gold medals for swimmers James Wilby, Eleanor Robinson and Thomas Hamer swelled England's tally to six and ensured they ended day one at the top of the medal table ahead of Australia, who finished with five. 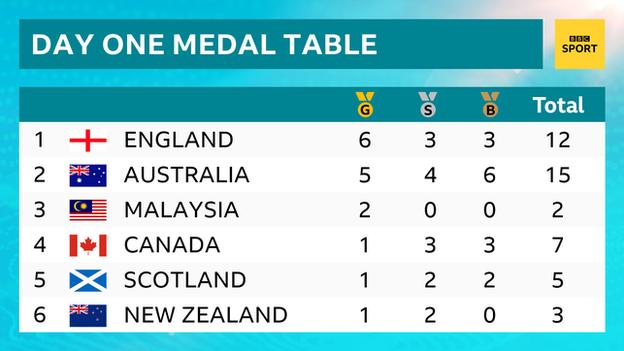 Scottish gold medal hopes Hannah Miley and Ross Murdoch had to settle for silver in the pool, while Scotland came third in the gymnastics.

But in the men's event, the Brownlee brothers - favourites for the title - failed to win a medal, with Scotland's Marc Austin taking bronze.

There was also disappointment for the hosts earlier in the day, as 100m hurdler Sally Pearson - Australia's face of the Games - withdrew with an Achilles tendon injury.

England finished with 258 points, 10 points clear of second-placed Canada, with Scotland in third.

Thornhill and Fachie light up velodrome

They beat Australia's Jessica Gallagher and her pilot Madison Janssen in the final, as Thornhill won her third Commonwealth medal.

Fachie also became a three-time Commonwealth champion, as he and pilot Matt Rotherham beat Wales' James Ball and pilot Peter Mitchell, who had to settle for silver.

Favourites New Zealand then took gold in the men's team sprint, with England in second place.

Wales lost out to England in the women's team sprint bronze medal race.

Miley was bidding for a third Commonwealth gold, having beaten Willmott in the same event in Glasgow four years ago.

But Willmott got her revenge, powering through the final 50m to win in four minutes 34.90 seconds.

Wilby delivered another English victory as he won the men's 200m breaststroke ahead of defending champion Murdoch, who finished 0.27 seconds back.

The final race of the day saw England take bronze in the women's 4x100m freestyle relay, with Australia winning in a world record time.

Brownlees fail to win a medal

The first gold medal of the Games went to Bermuda's Flora Duffy, as she took victory in the women's triathlon, 43 seconds ahead of Learmonth, who won England's first medal.

The pair later said injuries had hampered their training.

In the women's hockey Wales, ranked 26th in the world, shocked India with a 3-2 win, while Scotland were thrashed 6-1 by New Zealand.

England began their campaign with a comfortable 2-0 win over South Africa.

England made the ideal start in the netball as Tracey Neville's world number three side thrashed Scotland 74-28 in their opening pool game.

In the men's basketball, Scotland beat England 78-65 in their group game.

Eleven-year-old Anna Hursey won on her Commonwealth Games debut in the table tennis doubles alongside Charlotte Carey, but Wales lost 3-1 to India overall.

The Cardiff schoolgirl is thought to be the youngest athlete to ever represent Wales at senior level in sport.