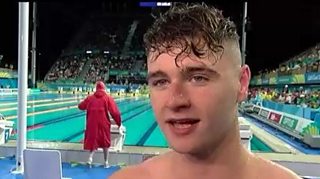 'There's a lot more in there' - Ferguson excited for backstroke final

Northern Ireland swimmer Conor Ferguson believes he can go even faster after qualifying for Friday's 100m backstroke final at the Commonwealth Games.

Ferguson finished fourth fastest in a time of 54.48 seconds but revealed afterwards that he accidentally struck the lane rope during his semi-final swim.