The 31-year-old posted a total of 299kg to win the home nations' first medal on day two of the Gold Coast Games.

"It was hard not to get a bit teary, if I'm being completely honest. Like every Welshman, I'm ridiculously proud," said Evans.

"To stand up there with the gold medal is special. I dread to think what's going on at my mum and dad's house at the moment."

London 2012 Olympian Evans was fifth in the -62kg category in Glasgow four years ago having made his Commonwealth Games debut in Delhi in 2010.

"I missed out on a medal in Glasgow and vowed I would never miss a medal again. I have let that spur me on for the past four years," he added.

"I don't know what the future holds to be honest, I have done everything I set out to do as a weightlifter." 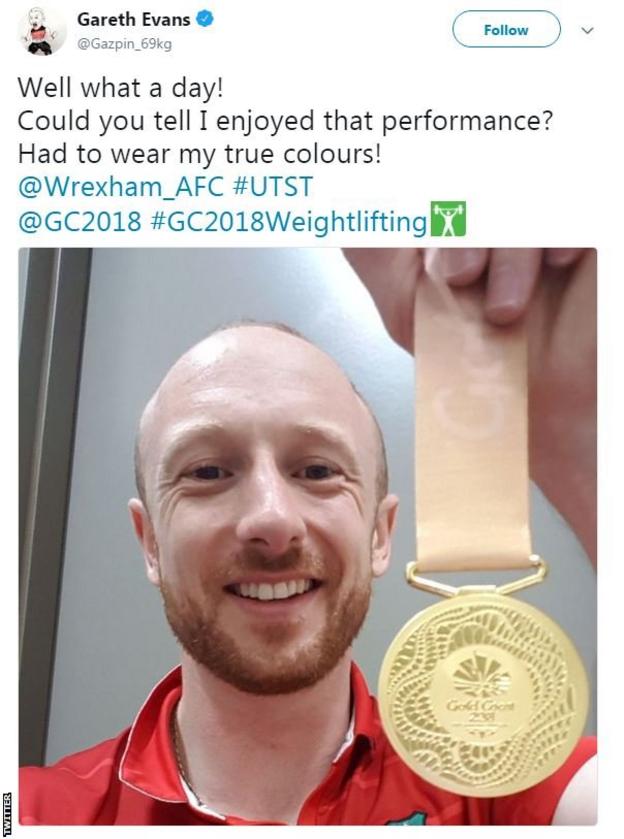 He has had it tough since the high of competing at London 2012; separating from his partner, losing his funding and missing out on a medal at Glasgow 2014.

I've spoken to him at length over the last few years as he's toured the country doing demonstration events to try and raise funds to continue his career.

He's told me about the hard times and been in tears when explaining how he's often not had enough money to buy his daughter presents.

That is why he is so emotional today - Commonwealth gold makes all of the sacrifices worthwhile and will hopefully help him make a better life for his family.