Charlotte Atkinson has become the first Manx swimmer to compete in an individual Commonwealth Games swimming final for 48 years.

The double British champion finished fifth in the 100m butterfly final in a new Manx record time of 57.88 seconds.

The 21-year-old said: "I am thrilled to be the first Manx swimmer to go under 58 seconds. It's another personal best and my best events are yet to come."

The Loughborough student finished half a second outside the medals.

The last Isle of Man-born woman to reach an individual final was Alexandra Jackson, who won a bronze medal at the 1970 Games in Edinburgh in the 200m freestyle.

Swimmer Guy Davies also set a new Manx record in the men's 100m breastroke to reach his semi-final, where he finished seventh.

England's Adam Peaty qualified fastest in a new Games record of 58.59 at the Optus Aquatic Centre. 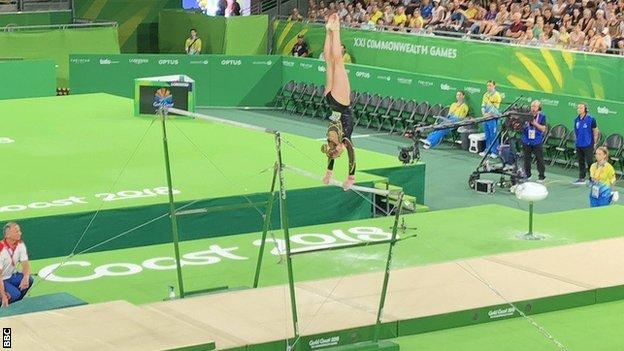 Meanwhile, the island's only gymnast at the Gold Coast qualified for the final of the Women's Team Final and Individual Qualification - Subdivision 2.

Nicole Burns, 20, finished the four pieces of apparatus with a combined score of 45.125 to reach Saturday's final at the Coomera Indoor Sports Centre.

She said: "I cannot believe I have qualified for the all-round final at the Commonwealth Games.

"I'm so happy with my performance and the Isle of Man support was amazing. I will try and enjoy every moment of the final."

Elsewhere, teenage cyclist Matthew Draper smashed an astonishing nine seconds off his PB in the 4000m-pursuit qualifier at the Anna Mears' velodrome.

"What an amazing atmosphere and a big shout out to all the Manxies in the crowd - what a noise," he added.

He qualified in 22nd place.

In the lawn bowls, Manx police officer Mark McGreal and his father Clive lost their third match 20-6 to Northern Ireland.

On the opening day they beat Jamaica and lost to Wales.