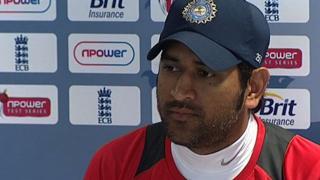 Dhoni takes unrest in his stride

India captain Mahendra Dhoni says that the riots affecting UK cities are "sad", but is fully focused on the third Test with England set to get underway at Edgbaston on Wednesday.

Already two-nil down, India need to win to keep alive hopes of avoiding a series defeat, and Dhoni is confident that officials will make the right decision of whether to go ahead with the match in Birmingham.

Several football fixtures, including England's friendly against the Netherlands at Wembley on Wednesday evening, have been postponed as violence spread from London to other parts of England.