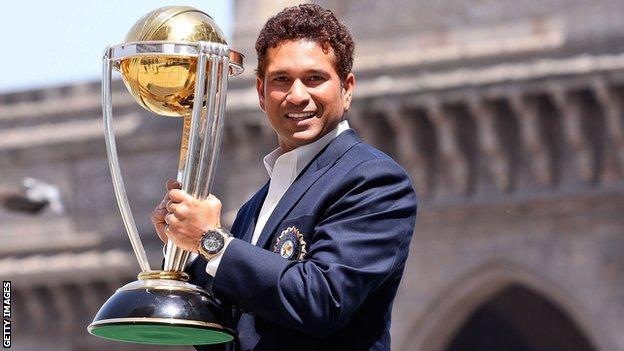 Despite standing at only 5ft 5ins, Sachin Tendulkar is a cricketing giant.

On 16 March 2012 he confirmed his place in sporting history by becoming the first player to score 100 international centuries, reaching the milestone in the Asia Cup match against Bangladesh.

So how did Tendulkar become the "Little Master" - a title previously bestowed on legendary opening batsman Sunil Gavaskar?

At 38, he has enjoyed more than 20 years at the top of the game, and his sparkling talent was evident at an early age.

In February 1988, while still at school, he shared a stand of 664 with fellow child sensation Vinod Kambli in the semi-finals of the Harris Shield.

He finished on 326 not out and word soon spread of his monumental talent.

At the tender age of 16, Tendulkar began his international career, making his Test debut for India against Pakistan in Karachi, scoring 15.

It might have been an inauspicious start, but he showed his backbone by batting on in a blood-soaked shirt after a Waqar Younis delivery smashed into his face early in the innings.

That steeliness was to become a hallmark of his play as he battled the best bowlers in the world while balancing the hopes and dreams of 1.2bn of his countrymen on his broad shoulders.

His first Test hundred came at the age of 17, helping save the Test against England at Old Trafford in 1990.

Soon after, Tendulkar was making history in the English domestic game when, in 1992, he became Yorkshire's first overseas signing. He did not disappoint, scoring more than 1,000 runs in the summer.

Considered as the most complete batsman of all time, Tendulkar racked up 16 Test hundreds before he turned 25 and in 2000 became the first man to score 50 international tons.

Tributes have never been too far away for a player who has transcended his sport.

Tendulkar is a modest man away from the middle, being the model professional on and off the pitch in a career which has spanned four decades.

The true greats - the really, really, really great - transcend their sport, become almost god-like, and gods don't go to the supermarket for their shopping. Tendulkar, a legend in his own career, is on the top table with Tiger, Jordan and Pele

"Cricket is something very, very special to me," he said. "It has never been about owning this or that car and the other things that come with this life.

"An obsession with money or worldly matters was always thumbed down. My only dream was to wear the Indian cap and the Indian colours."

However it has not always been plain sailing. He struggled to deliver success as captain - falling to series defeats against Australia and South Africa during his two spells in charge.

There were also some tough times as a batsman. He only scored one Test hundred between December 2004 and May 2007, being booed from the pitch in Mumbai after scoring one against England.

Suggestions of his demise proved premature, however, as he bounced back to form in fine style.

Cricket enthusiasts have always been split on whether Tendulkar is better than Lara, but the West Indian himself is in no doubt.

There was certainly something quite special about his match-winning undefeated 103 against England in 2008. The knock came just weeks after terror attacks rocked his home city of Mumbai and the Indian public lauded his latest century as a gift from the gods.

The desire to succeed in all forms of the game remained strong, and another landmark was created when Tendulkar became the first person to score a limited-overs double century against South Africa in 2010 and his 169th appearance made him the most capped player in Test history.

He also hit his 99th international century against South Africa in a World Cup match in March 2011, on his way to helping host country India to eventual victory in the final - Tendulkar finishing with almost 500 runs in the competition to ensure he lifted the coveted trophy at the sixth attempt.

Such was the clamour for Tendulkar to score his 100th ton in the 2,000th Test match ever played, an amazing £28m was staked by Indian cricket fans on whether he would reach three figures in the historic match between England and India at Lord's in the summer of 2011.

That particular fairytale was not to be, but now he has finally got there.