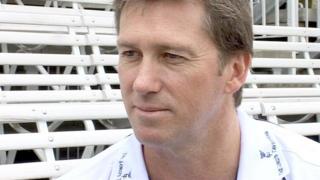 England deserve to be number one - McGrath

Former Australia bowler Glenn McGrath admits England are the team to beat in Test cricket at the moment. Speaking at an event organised by charity The Lord's Taverners, the paceman also said England have the bowling attack to potentially stay at the top for the next few years.

England became the number one ranked side in the world in Test cricket after their recent series victory over India and McGrath says they deserve to be there.