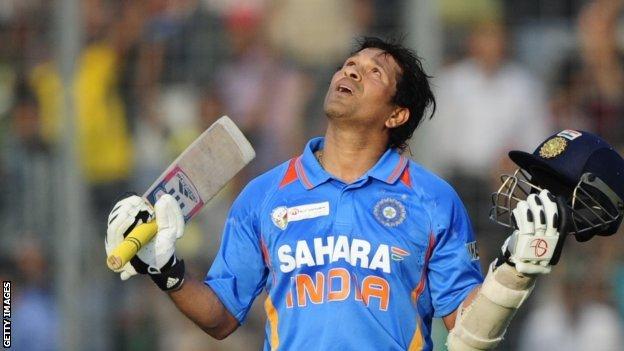 India's Sachin Tendulkar has become the first player to score 100 international centuries by compiling a ton in a one-day defeat against Bangladesh in Dhaka.

The 38-year-old completed his landmark century, his 49th in one-day cricket, with a single clipped to square leg.

After being dismissed for 114, he said: "I was not thinking about the milestone. It hasn't sunk in."

Tendulkar had twice been out in the 90s after scoring his 99th century against South Africa in March 2011.

The right-hander, who holds the record for scoring the most Test and one-day runs, has also scored 51 Test tons.

Tendulkar, whose own celebration was a little muted, was immediately congratulated by the Bangladesh players after he jogged through for the single to bring up his century, scored off Shakib Al Hasan.

The hundred was Tendulkar's first against Bangladesh in one-day cricket and he added another 14 runs before edging a Mashrafe Mortaza delivery to wicketkeeper Mushfiqur Rahim.

He added: "A year ago when I got my 99th hundred no-one spoke about it during the World Cup, then I guess it was the media who began talking about it.

"Wherever I went, to a restaurant, the house keeping, the room service, whoever I met just spoke about the 100th hundred.

"It became a little difficult mentally, because I am not playing only for my 100th hundred.

"The 99 hundreds that I scored, nobody spoke about them. Everyone had their opinion but eventually I have got to do what is important for the team.

"I have lost about 50 kilos. Enjoy the game and chase your dreams. I had to wait for 22 years for one dream, the World Cup."

Although the day belonged to Tendulkar, Bangladesh won the Asia Cup group match by five wickets with four balls remaining, and India now face Pakistan, who have won both their opening matches, as they bid to qualify for the final of the four-team event.

England Test captain Andrew Strauss was among a host of players to offer their congratulations to Tendulkar.

He told BBC Sport: "Sachin is a player by which all others are measured over the last 10-15 years, and for him to go out and get a hundred hundreds is an amazing achievement without precedent - it's unlikely to be achieved again."

"The entire stadium erupted in joy when Sachin Tendulkar scored his 100th international hundred. Fans, both Bangladeshis and Indians, were cheering and applauding as he became the first cricketer ever to achieve this record. Many Bangladeshi fans said they would pray for Sachin's century as their country would also become part of his world record. When he finally reached his mark, there was absolute joy in the stadium. There was no immediate reaction from Sachin himself. He took a while to acknowledge cheers from the crowd. Bangladeshi players went to congratulate him. Finally, the wait was over."

"On behalf of every cricket fan around the globe I congratulate Sachin on becoming the first person to score 100 centuries for his country," he said.

"This is indeed a magnificent feat and not likely to be easily emulated. The number 100 is special for a batsman and to record 100 centuries for your country is a massive statement.

"Like millions of others I have followed his career ever since he first played for India as a gifted 16-year-old and now, more than two decades later, his passion and personal records, which include more than 33,000 runs at international level, is a modern day wonder.

"Sachin is a true role model who will undoubtedly hold a special place in cricket's history."

Narayanaswami Srinivasan, the president of the Board of Control for Cricket in India said: "Ever since he made his international debut in November 1989, Sachin Ramesh Tendulkar has strode cricketing arenas the world over, like a colossus.

"He has been an inspiration to billions, and an ornament to the sport. March 16, 2012 will never be forgotten by cricket-lovers."

"Tendulkar's long career has been a triumph of class, character and courage. I wish him many more innings and feats to continue inspiring the youth."

He began his Test career as a 16-year-old in 1989 against Pakistan and scored 15 in a blood-soaked shirt after being hit in the face by a Waqar Younis delivery.

The following year he scored his first Test century, against England at Old Trafford and in 1992 became Yorkshire's first overseas signing.

Tendulkar surpassed fellow India legend Sunil Gavaskar's record of 34 Test centuries in 2005, became the highest Test-run scorer in 2008 and scored the first double century in a one-day international in 2010.