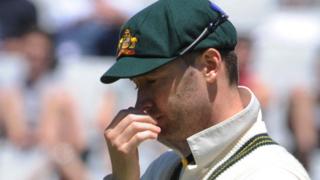 Captain Michael Clarke admits his side were "not good enough" as South Africa win the first Test by eight wickets after bowling Australia out for 47 in their second innings.

Centuries by Hashim Amla and Graeme Smith secured victory for South Africa inside three days but it was the second innings capitulation, the fourth lowest Test total in Australia's history, that disappointed the new captain.