Richie Benaud, who has died aged 84, will be remembered as one of cricket's finest commentators.

Yet his legacy extends far beyond the microphone. He was also an exceptional all-round cricketer and one of Australia's finest captains.

BBC Sport looks back on Benaud's remarkable life on and off the field.

Born in the Sydney suburbs on 6 October 1930, Benaud was taught to bowl leg-spin by his father, Louis, and is one of the few players in history who can lay claim to having mastered the art.

It took him until his 25th Test to pick up his first five-wicket haul, but he became a potent force in Australia's attack, taking 248 wickets at an average of 27.03.

Never afraid to innovate, he single-handedly spun Australia to an unlikely victory in the Old Trafford Ashes Test of 1961 when he became the first player to go round the wicket and bowl into the footmarks made by the bowler at the opposite end.

England had reached 150-1 in pursuit of 256 when Benaud took five wickets in 25 balls to win the match and series, thus retaining the Ashes.

A genuine all-rounder, Benaud is one of a select group of Australians to have scored 10,000 runs and taken 500 wickets in first-class cricket.

As a result of a stiff shoulder, brought on by a smallpox vaccination, he was forced to bat with his elbow up. But it worked well for him.

In June 1955, he bludgeoned a century in only 78 minutes against a West Indies attack that included legendary all-rounder Sir Garfield Sobers. It remains the third fastest Test hundred in terms of minutes.

After scoring two of his three career Test centuries on the 1957-58 tour of South Africa, Benaud was rewarded with the Australian captaincy.

With an attacking style that has influenced Australia captains from Steve Waugh to Michael Clarke, the national team blossomed under his leadership, never losing a Test series during his 28 matches in charge.

In the famous tied Test with the West Indies in 1960, Benaud took on a target of 233 in under a day and, coming in with the score at 92-6, scored a belligerent 52 to almost see his side over the line.

Asked for the secret to his success, his reply was modest and witty: "Captaincy is 90% luck and 10% skill. But don't try it without that 10%." 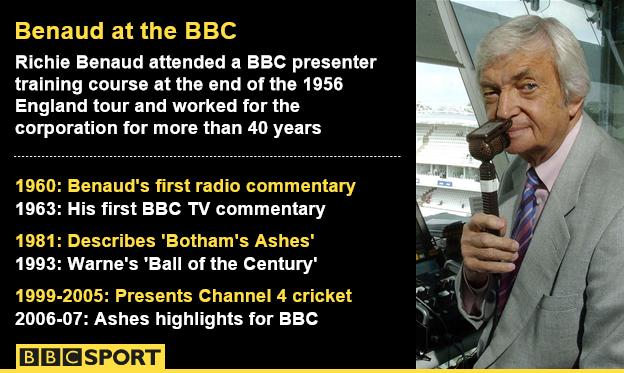 Benaud was still playing in 1956 when he attended a BBC journalism training course. He eventually took to the airwaves in 1960, developing a warm, smooth delivery allied to a peerless knowledge of the game.

Splitting his time between Australia and England, he became the face of cricket in both countries for more than 40 years, his trademark cream jacket becoming as synonymous with the sport as leather and willow.

When asked to sum up his commentary style, he said his mantra was: "If you can add to what's on the screen then do it, otherwise shut up."

Quiet and authoritative, Benaud's way with words and knack of coining a memorable phrase made him a popular subject for affectionate mimicry among cricket fans in the United Kingdom and down under.

His signature greeting of "morning everyone" became a household refrain, while his delicious delivery of the word "marvellous" seemed to make everything seem well with the world.

Some of Benaud's one-liners have also entered cricketing folklore. During Sir Ian Botham's famous Ashes century at Headingley in 1981, Benaud described one of the all-rounder's sixes with the words: "Don't even bother looking for that. It's gone straight into the confectionery stall and out again."

When Australia tail-ender Glenn McGrath was once out for two, Benaud quipped that he was "just ninety-eight runs short of his century".

Outside the commentary box, Benaud remained an influential figure in the development of the sport.

He was central to the birth of modern one-day cricket, drawing up the rules for Kerry Packer's World Series, which helped revolutionise the game in the late 1970s.

"He knew the game had to develop and he always had interesting theories," said BBC cricket correspondent Jonathan Agnew. "You never heard him say cricket was better in his day."

The author of more than a dozen books on cricket, Benaud was awarded an OBE for services to cricket in 1961 and inducted into the International Cricket Council's Hall of Fame in 2009.

The sight of hundreds of Australia fans wearing Benaud fancy dress at every Sydney Test is testament to the esteem he is held in by the public.

That he was Australian did not matter to English supporters, who gave him a standing ovation at The Oval in London after his final commentary stint in England during the 2005 Ashes series.

The man away from cricket

Benaud was a big fan of horse racing and enjoyed pitting his wits against fellow commentator and close friend Jack Bannister for almost 60 years.

"Every Saturday for the last 20 years, wherever we were in the world, we would ring each other up, pick a race and bet on it," said Bannister.

"We'd keep a tally of the winners throughout the season and whoever lost would have to take each other and our wives out for dinner. I ended up paying for many more suppers than him. Even in the last few weeks, his wife Daphne would still ring through with the selections."

Benaud also played golf off a single-figure handicap. He and Bannister were such enthusiasts that they managed to squeeze in a full round every morning before play at the Edgbaston Test each summer.

When Benaud crashed his 1963 Sunbeam Alpine into a brick wall in 2013, he was more worried about the car than he was about his own health, according to Bannister.

"Richie absolutely adored that car," he said. "He was heartbroken when they told him it was a write-off.

"Of all the things he was good at, driving was not one of them. I know a fair few journalists who politely refused when Richie offered them a lift..."

According to renowned Australian author, journalist and historian Gideon Haigh, Benaud was "perhaps the most influential cricketer and cricket personality since the Second World War".

BBC cricket correspondent Jonathan Agnew added: "Richie Benaud was the doyen. He was a one-off."