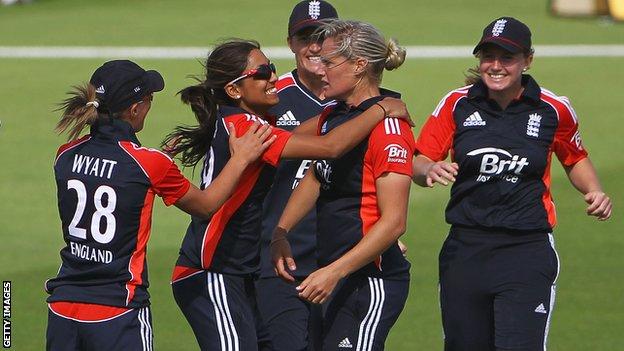 England will rest pace bowler Katherine Brunt for their tour of New Zealand in February and March.

The sides will play five Twenty20 internationals and three one-dayers.

Brunt returned early from England's recent unbeaten tour of South Africa because of a back problem.

Seamer Anya Shrubsole is added to the squad while batter Beth Morgan, who replaced Brunt in South Africa, keeps her place after recovering from shoulder surgery.

Left-arm spinner Holly Colvin remains unavailable because of her university commitments, but the squad, led by skipper Charlotte Edwards, is otherwise unchanged from South Africa.

Brunt, 26, has 124 international wickets in all forms of the game and is currently third in the International Cricket Council's bowling rankings.

The first three Twenty20 games against the White Ferns will be played as the warm-up to New Zealand's men's team's Twenty20 internationals against South Africa.

England & Wales Cricket Board head of women's cricket Clare Connor said: "The England women's team has had an exceptional 2011.

"The next 18 months provides an exciting schedule for international women's cricket with the ICC World Twenty20 in September 2012 and the Women's World Cup in 2013."