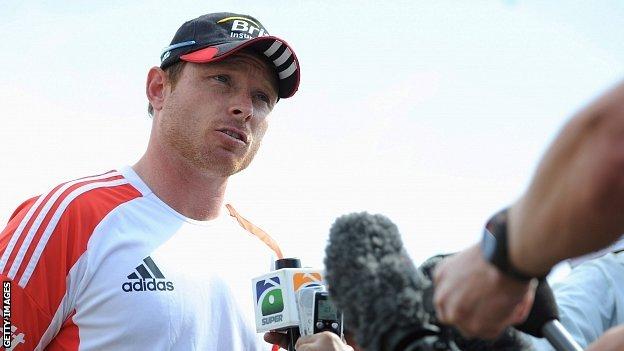 England batsman Ian Bell has been passed fit for the third Test against Pakistan, which starts on Friday.

Bell has been suffering from the effects of a stomach bug and missed training on Tuesday.

However, he has now been cleared to play in the final Test in Dubai as England seek to avoid a 3-0 whitewash.

"We are looking forward to putting in a performance in the last Test," he said.

"The bowlers have been fantastic and now it's up to the batting unit to give them some support."

Of England's top six, Bell, Andrew Strauss, Kevin Pietersen and Eoin Morgan have been impotent against Saeed Ajmal and Abdur Rehman in particular.

In the first two Tests, 34 of England's 40 wickets have tumbled to Pakistan's spinners.

Off-spinner Ajmal has led the destruction with 17 scalps, while left-armer Rehman has claimed 12 wickets and off-spinner Mohammad Hafeez five.

Following honest exchanges in a team meeting on Tuesday, all of England's batsmen returned to net practice hoping to work out a method of playing the slower bowlers.

"It's important we do not lose that confidence and still play in an aggressive, attacking manner in this form of the game," said Bell, who was part of the side bowled out for 72 en route to a 72-run defeat in the second Test in Abu Dhabi.

England could throw a real curve-ball and make two changes by bringing in Davies and Bopara, but I don't think they will

"The hardest part is starting an innings [against spin]. It generally gets easier, the longer you go on.

"But unfortunately I've got some balls that have got me out, so I'm desperate as ever to get big runs in the last Test.

"We are preparing and training as hard as possible to make sure we get it right in the third Test."

England need to win to be sure of remaining top of the rankings on 1 April, when a $175,000 (£111,000) cheque will be awarded to the world's best Test side, while Pakistan are seeking their first series clean sweep since beating Bangladesh in 2003.

"It will be a big achievement for the team (winning 3-0)," said Misbah. "The way the team is performing with consistency, if we play well like we did in the first two games good results will come, but we will not take that extra pressure into the Test."

However, England fast bowler James Anderson insists there is still a buoyant atmosphere among their squad.

"We've enjoyed the good times we've had over the last couple of years and we'll stick together during the hard times, which is now.

"Everything's been clicking for the last couple of years, but teams do lose the odd game and the odd series and unfortunately it's come at this time when we've just become number one in the world.

"But the batsmen have been fantastic for us in the last couple of years and we have every faith in them that they'll come back strong."