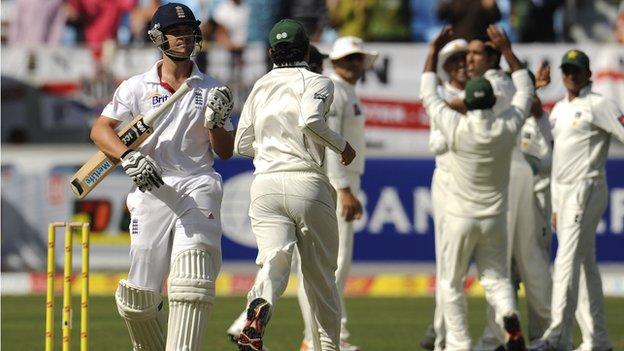 England's batsmen again failed to support their bowlers as 16 wickets fell on day one of the third Test against Pakistan in Dubai.

But Alastair Cook, Jonathan Trott, Ian Bell, Eoin Morgan and Matt Prior were all dismissed cheaply for England.

Andrew Strauss (41 not out) provided some resistance as the tourists reached 104-6 at the close, a lead of five.

The growing authority with which Strauss played the Pakistan spin bowlers was perhaps the only positive England could take from another disappointing batting display.

Some of the Pakistan batting in the morning was poor, but the England bowling was excellent - Anderson and Broad kept the length up and Pakistan succumbed to poor shots. With all the talk about England collapsing to Pakistan's spinners, they've struggled against top-quality seam bowling. But we've made their spinners look world class - Prior's was the perfect example, he was so square-on and had his bat miles in front of his pad. That's not the way to play the slow turning ball

Indeed, when he was in tandem with Kevin Pietersen (32) it looked as though England would build a substantial first-innings lead and set a platform to earn a victory that would secure their position at the top of the world Test rankings.

However, after Pietersen was adjudged lbw to left-armer Abdur Rehman, the frailties against spin that have seen England slip to defeats in the opening two Test matches were again exposed.

First Bell was stumped overbalancing against a Saeed Ajmal doosra, then Morgan was trapped leg before when trying to play Rehman off the back foot.

More late drama was to come as Prior was bamboozled by a beauty from Rehman that turned enough to pass the outside edge en route to middle and off stump.

The middle-order collapse left the match evenly poised and hauled Pakistan back into contention after a rampant display by England's bowlers in the first two sessions.

With Anderson swinging the new ball and Broad finding movement off the pitch, England's seamers had removed all of the hosts' top five inside the first hour.

As early as the sixth ball of the day, Anderson swung one back into Taufeeq Umar to trap the left-hander lbw, before Broad, with a little help from the Decision Review System (DRS), took over.

First Azhar Ali was given out on review after inside edging to wicketkeeper Prior and, after Younus Khan poked at a climbing delivery to edge behind, Mohammad Hafeez was given out lbw on review despite suggestions of an inside edge.

Anderson completed the hosts' miserable first hour by pinning Misbah-ul-Haq leg before with an inswinger, with Broad returning to have Adnan Akmal trapped in front with one that nipped back.

There was still time before lunch for Rehman to sky Graeme Swann to mid-off to leave Pakistan in total disarray.

Asad Shafiq, with Ajmal for company, halted England's progress following the break but, after both men were removed by Panesar, it was left to Anderson to bowl Umar Gul, who missed a heave across the line.

At 35, the Pakistan v England contest holds the record for the number of lbw decisions in a three-match series. The record for a series of any length is 43

After running through the Pakistan batting line-up in only 44.1 overs, England would have been looking to bat to a position that would secure a consolation victory.

Instead, they were soon 7-2 and served with an instant reminder of the capitulation to 72 all out in the second Test that gave Pakistan the series.

Gul got one to move away that Cook followed and edged to wicketkeeper Akmal before Trott was adjudged lbw off the same bowler.

The Warwickshire man consulted Strauss and decided not to review, but replays, which the England skipper saw on the big screen inside the ground, showed the ball would have missed leg stump.

Nevertheless, Strauss, hesitant on the back foot to the spinners at first before showing enough confidence to use his feet, was able to combine with Pietersen in a stand of 57, the highest of the day.

Pietersen was showing flashes of his trademark dominance before falling to one that the DRS adjudged to be brushing leg stump, and his departure signalled yet another England collapse.