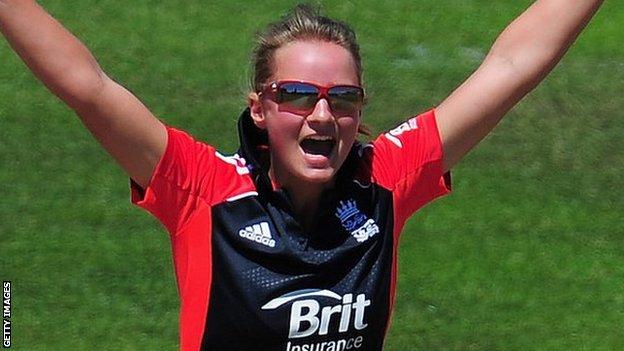 Staffordshire all-rounder Danni Wyatt has said the competition for places is inspiring her to continue improving and keep her spot in the England team.

Wyatt is in the squad of 14 that will tour New Zealand later this month.

"There's competition for places now so you can't take your place for granted," the 20-year-old told BBC Radio Stoke.

"You've got to keep working hard, training hard and improving. Then it's just a matter of taking my chances when I get the chance to play for England."

Wyatt continued: "I learn a lot from the experienced players in the squad, like [captain] Charlotte Edwards and Lydia Greenway.

"They always give me top advice so that I can keep improving."

The team fly out to New Zealand on Sunday, ahead of a month-long tour which will see them play five T20 matches and three one-day internationals against the Kiwis.

"It's going to be a very tough series," said Wyatt. "The Kiwis have got a very strong bunch of girls who can hit it a long way.

"We've got to make sure we start well, get their main batters out, and we'll be fine.

"All the girls are looking in good form and we're all confident of winning the T20 series five-nil."

Wyatt has played 12 ODIs and 19 T20 matches for England since making her international debut in India in March 2010.