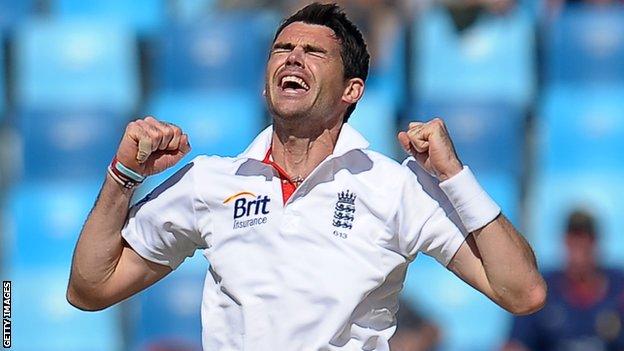 Bowler James Anderson said there was no shortage of confidence among England's batsmen, despite another nervous display in the final Test.

Having been dismissed for just 72 to lose the second Test and the series, England bowled out Pakistan for 99 in Dubai .

"All our guys are confident - but they're probably just not spending the time at the crease they would like.

"Pakistan are bowling some really good balls to get us out."

"It was probably a good day to be watching, but a pretty nerve-wracking one for the players," Anderson admitted.

"It's going to be a really tight match."

Earlier the Lancashire bowler took the final Pakistan wicket, finishing with 3-35, as England dismissed Pakistan for their lowest total of the series.

After a stand of 57 between skipper Andrew Strauss and Kevin Pietersen, four wickets then fell to spin for the addition of only 34 runs.

"We were delighted with the start we got with the ball, and the way we kept creating pressure throughout the innings," Anderson said.

"Unfortunately, we didn't get off to a great start with the bat - and it looks like it's going to be a battle for the next few days."

Anderson will resume his partnership with Strauss on day two, with the captain needing a further nine runs to complete his first half-century of the series.

"I've got to hang around as much as I can and bat for Straussy," he said.

"He's batted a while on that pitch and is used to the pace of it, so he can maybe score a bit more freely.

You can listen to daily highlights on BBC Radio 5 live sports extra, and listen to Jonathan Agnew and Geoff Boycott's review of the day's play on the TMS podcast.