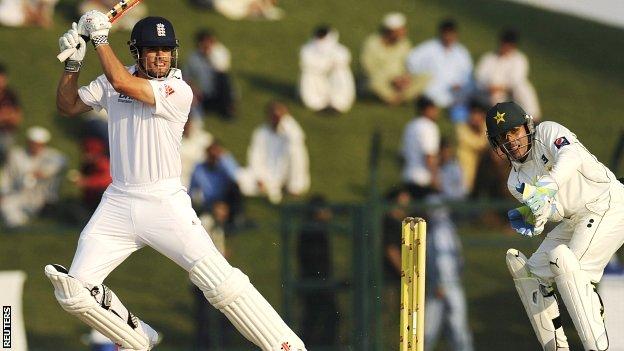 England opener Alastair Cook has called on the team to show character in the remainder of the final Test in Dubai.

"It will take some serious guts to drag ourselves out of this," Cook admitted.

"We all know we're a very long way behind in this game. But there are some good players in that dressing room, and I hope we can stand up."

in Test cricket by winning their home series against India 4-0 last summer.

But they now face the prospect of a series whitewash, following a 10-wicket defeat in the first Test and a crushing 72-run reverse in Abu Dhabi, .

They began day two in Dubai five runs ahead and with four wickets in hand, but night-watchman James Anderson departed early and skipper Andrew Strauss was stumped for 56 advancing down the wicket, and the tourists were dismissed for a modest first-innings lead of 44.

Two wickets in the first 10 overs gave England hope, but the third-wicket pair took the game away from them.

"When they came in, they were still 20 runs behind us - and we had a really good opportunity to take a couple more wickets," said Cook.

"We tried a lot of things. But Younus especially took the attack to us. He never let the bowlers settle into any type of rhythm."

The England bowlers looked increasingly ineffective as the day wore on, with Graeme Swann conceding 0-58 in 19 overs.

"The pitch characteristics have changed. There were less wicket-taking balls around than there were yesterday," Cook said. "It's quite easy to see that.

"Maybe it's because it slightly lost that tackiness, and the ball seamed and spun off it.

"But they didn't give us a chance in those last two sessions and played very well."

And Cook, who averages 22 in the series thus far, added: "When we do get round to batting again it's going to take some serious character from the top six to turn it around.

"Anything is possible, but it's going to take a lot of mental toughness to deliver it.

"I know we've got the players in there. But there's only so many times you can keep saying that - we're going to have to get out there and do it."