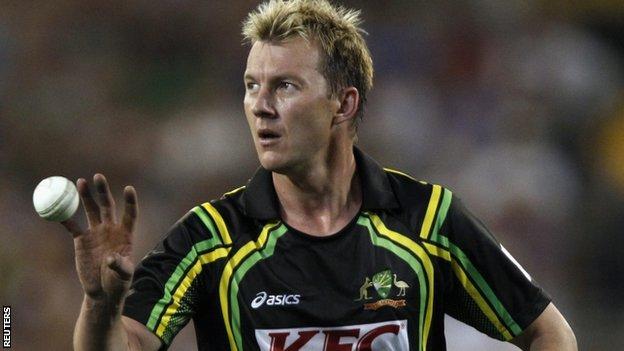 Australia fast bowler Brett Lee is set for a month on the sidelines after breaking his foot in a Twenty20 match against India.

Cricket Australia team doctor Trefor James said: "Brett Lee sustained a fracture of his right foot when he was struck by a ball.

"We now expect Brett will return to cricket in four to six weeks."

He has since been replaced in the squad by seamer Ben Hilfenhaus, who has not played a one-day international since 2009.

He suffered the injury when he was struck during the last over of his spell during Australia's eight-wicket defeat to India at the MCG on Friday night.

"Brett was able to complete the over," added James. "However, the foot became more painful and swollen the following day. An X-ray has confirmed a fracture of the small toe."

Meanwhile, injured left-arm paceman Mitchell Johnson is targeting a return to international cricket in the one-day series against England in June and July.

Johnson, who has played 47 Tests and 107 one-day internationals, required surgery in December on a left foot injury he suffered on Australia's tour of South Africa the previous month but has been making encouraging progress.

He plans to make his comeback in April with the Mumbai Indians in the Indian Premier League in a bid to force himself into the squad for the England tour.

"It's a perfect opportunity for me coming back from injury to play the shorter form of the game to build up my bowling and hopefully be selected for Australia later in the year," the 30-year-old said.