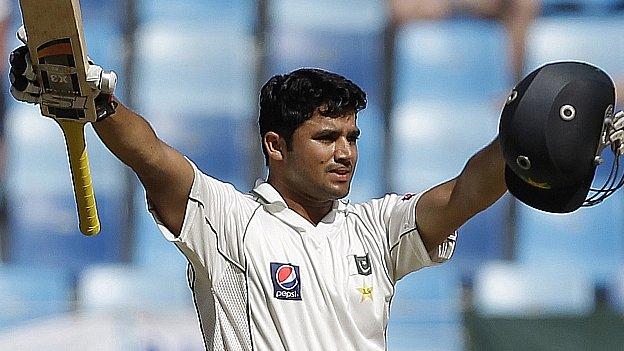 England face a mammoth task to avoid a series whitewash after Azhar Ali's composed 157 kept Pakistan in control of the third Test in Dubai.

Set an imposing 324 to win on a turning pitch, England's openers survived a tricky 20 overs to close on 36-0.

But Monty Panesar (5-124) and Graeme Swann breathed life into the contest as the hosts collapsed to 365 all out.

England have only chased down more than 300 to win a Test match on three occasions, their best a successful pursuit of 332 against Australia in Melbourne in 1928.

And after being bowled out for fewer than 200 four times in five innings this series, their chances of pulling off a spectacular victory appear slim.

There were, however, encouraging signs in the way Andrew Strauss and Alastair Cook steered England through to the close, showing great skill and resolve against Pakistan's trio of spinners in their highest partnership of the series.

Cook did have a lucky escape when he was dropped at third slip by Taufeeq Umar off Umar Gul at catchable height in the third over, while Strauss survived an lbw appeal off Mohammad Hafeez, which Pakistan unsuccessfully sent for a referral.

The hosts' position of strength owes a great deal to the supreme efforts of emerging star Azhar, who batted for just under nine hours in a fine exhibition of patience and skill to post his highest first-class score.

After surviving a low dropped catch by Graeme Swann at second slip early in the day, he and captain Misbah-ul-Haq looked poised to build a lead in excess of 400.

They added 87 for the fourth wicket in a monotonous but effective partnership, before the game sprung to life with a flurry of five wickets in the half hour before tea.

"An England win? Improbable, yes. Impossible? No. What sort of mental attitude will England have tomorrow? Do they come out trying to play shots, or do they take it hour by hour? Pakistan were scoring about 75 runs a session but, by keeping their wickets intact, Cook and Strauss were just waiting for a bad ball and they managed to get themselves a few runs. By playing a careful, watchful innings they've got themselves a good start. If they do that for an hour in the morning, Pakistan could start to get irritable."

Asad Shafiq became Panesar's third wicket when he missed a sweep shot and Adnan Akmal his fourth when he was bowled by a ball that turned away and clipped the top of off stump.

At the other end, Swann's travails continued as he was smashed over the top by Azhar.

But his luck finally turned in his 33rd over when he removed the left-handed Abdur Rehman with a sharp turner before following up with the wicket of Saeed Ajmal, who was athletically caught by James Anderson at slip.

Azhar went on to reach 150 off 431 balls before finally succumbing in the final session when he nudged to Cook at short leg.

And Gul was the last wicket to fall, thrashing across the line to give Panesar a five-wicket haul for the second successive Test.