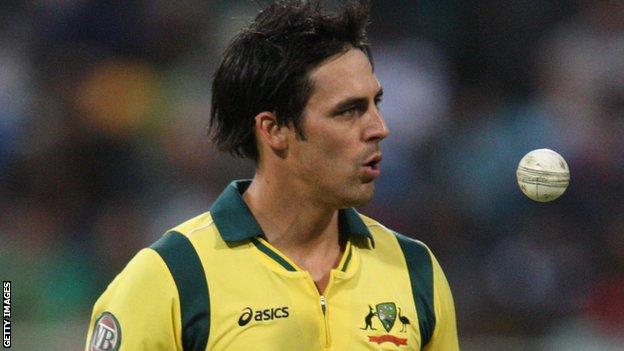 Marcus North, Glamorgan's first overseas player this year, sounded out his compatriot over a move to Cardiff.

"I'm interested," said Johnson, who has played 28 Twenty20 internationals. "I'm just waiting for a call from them."

The 30-year-old, who has taken 190 wickets in 47 Tests, underwent surgery on his left foot late last year and is expected to return to fitness in April.

He was signed by Mumbai Indians in Saturday's Indian Premier League auction in Bangalore and he could join Western Australia team-mate North in south Wales.

Counties can field two overseas players in the English Twenty20 competition, with Glamorgan opening their campaign against Northamptonshire on 14 June as they bid to qualify for the knock-out stages for the first time since 2008.

Glamorgan also have an extra incentive as T20 finals day in August will be held at the Swalec Stadium.

Johnson took five wickets on his previous visit to the ground - Australia's draw with England in the opening Ashes Test of the 2009 series - and could form a pace attack with former England fast bowler Simon Jones, who returned to Glamorgan over the winter.

"I wouldn't say T20 is my favourite form of the game but it's definitely a good way for me to come back," Johnson told Fox Sports.