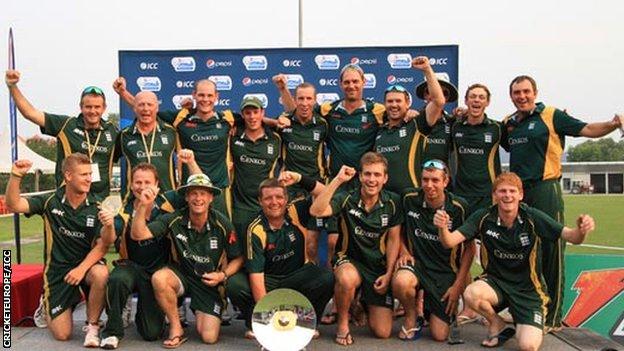 Guernsey have been forced to recall former skipper Andy Biggins to their squad for the World Cricket League Division Five tournament in Singapore.

Biggins comes in for Tim Duke after the all-rounder injured his wrist in a cycling accident.

"He clipped a wing mirror of a car and came off his bike and badly sprained his wrist," captain Stuart Le Prevost told BBC Guernsey.

"It's his bowling wrist as well which obviously hasn't helped."

But Le Prevost says Biggins, who has not played in a World Cricket League tournament before and last played in an international tournament for Guernsey in 2006, is the perfect replacement for Duke.

"He has a wealth of experience. He's a great guy and we don't have to worry about anything with him, he's been here and done it before and it's great to have him on board."

I've got no doubt that if we play consistently well and perform to our ability we've got a great chance in this tournament.

The island squad go into the tournament off the back of a win in the World Cricket League Division Six tournament in Malaysia in September.

They will face Bahrain, Argentina, the Cayman Islands, Singapore and Malaysia as they look to get promoted to Division Four of the World Cricket League.

But the tournament is being held outside of the usual cricket season in Guernsey, leading the island side to spend five days in Dubai next week to acclimatise and play some practice matches as they have only been able to train indoors for the past few months.

And with former Hampshire player Lee Savident out with a back injury, Le Prevost says there is a chance for some of the newer members of the squad to stake a claim for selection for the opening match with Bahrain.

"With these new guys Dubai is a massive chance for them to impress. We've got two day/night games in Dubai so hopefully they can stake a claim," the Guernsey skipper explained.

"We've only ever had tournaments that are either in the middle of our season or right at the end so we've had a whole season of playing then going to tournaments.

"This is completely different and that's why the preparations been massively important."

Guernsey have an impressive record in international cricket, having reached the final of their last two World Cricket League tournaments.

"I've got no doubt that if we play consistently well and perform to our ability we've got a great chance in this tournament," Le Prevost said.

"Malaysia was fantastic, winning that tournament was absolutely brilliant, so people are going to be out to look at us and think we are a bit of a threat in this tournament."