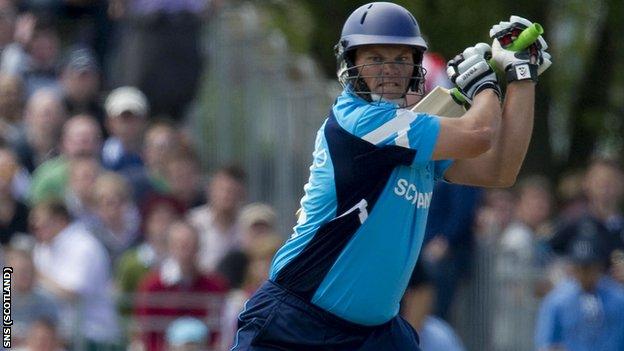 Scotland have selected batsmen Ewan Chalmers and Freddie Coleman for their Intercontinental Cup game against the United Arab Emirates next week.

The pair replace Josh Davey, who is recuperating from surgery, and Kyle Coetzer, who is playing in the Bangladesh Premier League.

Coleman, 20, has represented Scotland up to under-19 level.

Chalmers, 22, made his debut against Canada in 2009, and hit a century against the MCC at Lord's last year.

Pace bowler Alasdair Evans is also included as Scotland look for their first win in the four-day game tournament following draws against Holland and Namibia.

After the Intercontinental Cup match ends on 19 February, Scotland travel to Sri Lanka for a training camp and series of 50 and 20-over matches.

Fraser Watts, Calvin Burnett, Jan Stander and Davey will join the squad in Sri Lanka along with Matthew Parker, who is closing in on a comeback from a hip injury.

Parker could be involved when Scotland return to the UAE for two games in the ICC World Cricket League Championship on 7 and 9 March, where they will be joined by Coetzer.

Scotland's focus then switches to the World T20 qualifiers later in the month.