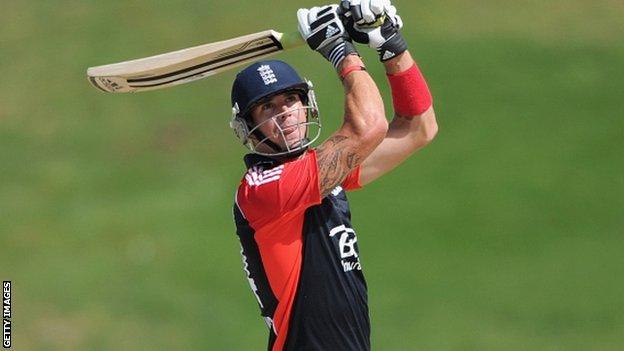 England's batsmen had some time in the middle in Abu Dhabi, but only after their target was revised after the England Lions were skittled for 96.

In the only warm-up match ahead of the one-day series against Pakistan, England coasted to a seven-wicket victory against their second string side.

In an attempt to give the out-of-touch England batsmen some much-needed practice, the captains and coaches agreed to revise the target - meaning that the game lost its List A status - to a slightly more testing 230.

Opener Kevin Pietersen made 41, his highest total of an otherwise unhappy tour for him so far, captain Alastair Cook (68) and Jonathan Trott (75 not out) as England won with ease.

With all four matches against Pakistan being day-night games, this match, which finished just after 3pm local time, will have given England no match experience under floodlights.

However, fast bowler Jade Dernbach denied that the lack of night practice was an issue.

"I think the important thing is that the guys got the miles under their legs and got used to the conditions," he said.

"We've got a few training days scheduled under lights, and I think that will be perfect preparation for us."

England's bowlers continued the fine form that was shown in the Tests, with Steve Finn and Dernbach reducing the Lions to 14-4.

South Africa-born Dernbach took two in his first over, including that of Alex Hales with his first delivery, sending the off-stump cartwheeling out of the ground.

"If I can take that trick around with me everywhere, I'll be all right," Dernbach said.

Finn took three wickets, with a pair for Graeme Swann, one for Samit Patel, and one for Tim Bresnan, back out in the UAE after an elbow injury kept him out of the Test series.

The Lions regained some respectability through James Taylor and Chris Woakes, but a target of 97 was never going to leave England's first-choice batsmen much time in the middle.

England began their revised chase in confident style, but Pietersen will be disappointed to have been caught behind when well set off the bowling of Woakes.

Cook and Trott both played solid, if unremarkable, innings, and Ravi Bopara (36) fell just as he too was looking well-set.

England go into the one-day series, which gets under way on Monday, off the back of two whitewashes - against Pakistan in the Test series and the 5-0 defeat by India in October.

Dernbach insists that the mood in the team he has joined is upbeat: "Pakistan have a bit of momentum, and their spirits are going to be high, but it's our responsibility to go out there and perform as we can, if we do that, we know we're good enough to win."

Jos Buttler will be assessed ahead of the series this weekend, having missed out after he split the webbing in his hand when playing for the Lions.