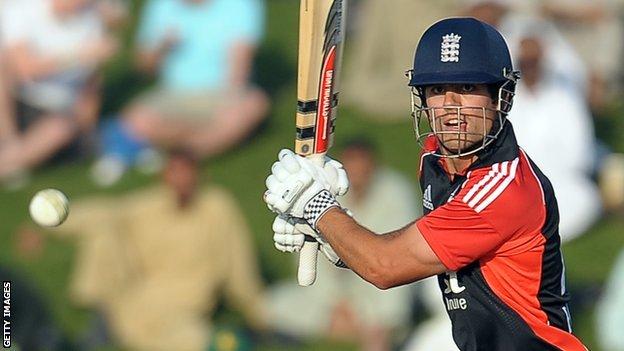 Alastair Cook's innings in England's win over Pakistan in the first one-day international in Abu Dhabi was a further example of what an impressive individual he is.

Just 18 months ago, his place in the Test side was being questioned before he got a century against Pakistan at The Oval and then went on to break all those records in Australia.

Then, when he was chosen as one-day captain, there were people questioning if he should even be in the side, let alone be skipper.

The defeat at Everton was disappointing. Chelsea's challenge is to make sure they qualify for the Champions League because finishing outside the Premier League's top four would be unacceptable. Andre Villas-Boas has to make sure of that. They are still in the Champions League and the FA Cup. Winning both of those and finishing fourth would still make it a great season for the Blues.

When he first came into the England one-day side, he had hardly played for Essex, and it may have been a bit early for him to be thrown into the international scene because he didn't know his one-day game.

He got left out, went back to Essex and worked hard with Graham Gooch. And we're now seeing the fruits of that labour. Cook is a more expansive player now, with the ability to manoeuvre the ball around the field.

The left-hander has answered all the questions thrown at him in his own, quiet manner and gone on to have incredible success.

Now, no-one can question whether he scores quickly enough. The 137 he scored on Monday came at almost a run a ball and, without it, we could well have been talking about another England defeat following the disappointment of the Test series.

Cook received good support from the impressive Ravi Bopara, who was basically a drinks waiter in the Test series, but is a high-class player.

The knock he played, although he could have been out twice, has at least secured his place for the rest of the series. As well as being a high-class bat, he's a handy bowler and I'm very pleased he got off to a good start.

Bopara's chance to bat at number four came after Kevin Pietersen was moved up to open the innings.

I would take Harry Redknapp for England. Fans can relate to him and it seems to be a firm favourite amongst the players. Now he needs to decide if it is a job he wants to do, because being the manager of the England football team is the second hardest job in the country, second only to the Prime Minister.

Pietersen is shy of runs, and it showed, but he's still a huge talent. I understand that he wanted to open and I always believe that you should get your best players in as early as possible. At the end of the series, we will have a better idea as to whether he is suited to opening.

Even with the efforts of Cook and Bopara, it looked as though England might only have a par score before the Pakistan top order was blown away by Steven Finn.

The tall Middlesex paceman was another who had no part to play in the Tests, but he built on his good performances in India, where he was one big positive from the 5-0 one-day series drubbing.

He bowled quickly, over 90mph, which looks like something that comes naturally to him. His pace was exceptional, but his line and length was even better.

Finn has had a taste of Test cricket, and he will be a Test bowler again. He is a big talent who's getting better and better. It's good that he is staking a claim to be included in the Test side but, at the same time, it's good that England have such an array of quality fast bowlers to choose from.

It's great for England that they are 1-0 up. Cook's side thoroughly deserved to win the game. But Pakistan underperformed, they will come back strongly and England will need more than two batsmen to contribute in the second game on Wednesday.