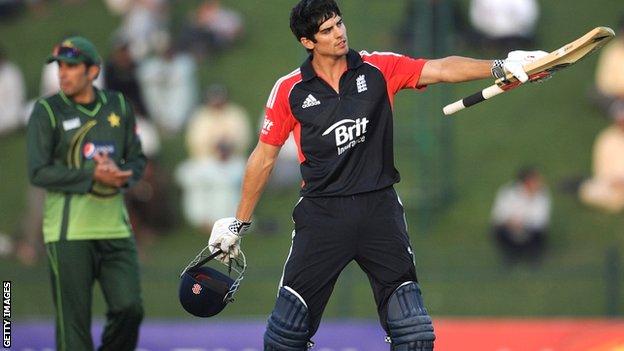 Cook was dropped on 28 but anchored the innings again in calm fashion with 10 fours in 102 from 121 balls as England moved 2-0 up in the four-match series.

Imran Farhat and Misbah-ul-Haq both hit 47 for Pakistan but Steven Finn took 4-34 as they were all out after 49 overs.

"It was a slightly different wicket, slightly slower and slightly harder to time the ball. We thought 250-260 would be hard to chase down. When Afridi and Misbah were in it was touch and go but it was outstanding bowling by the three seamers, we've got a lot of experience and we helped each other through. It was a really good team performance and hopefully we can finish the job in Dubai."

And so after the disappointment of the Test series whitewash England's resurgence in ODI matches continues with Cook authoritative at the helm with the bat and when marshalling the troops.

The 27-year-old left-hander offered further proof that a genuine opener playing authentic strokes can succeed in limited-overs matches and was able to score at a good pace on a sluggish surface, part of which was the strip used for the second Test when England collapsed to 72 all out.

He got off the mark in the fourth over with a sumptuous back foot drive for four and but was reprieved by makeshift wicketkeeper Umar Akmal, who spilled a routine edged cut shot up to the wicket, and was guilty of several further errors.

Cook was the more fluent in an opening stand of 67 with Kevin Pietersen, who after shuffling around in his crease to little effect, struck consecutive drives to the boundary in more conventional fashion, but departed to spin for the sixth time in seven international innings on the tour.

Saaed Ajmal was introduced in the 15th over and the bowling powerplay was taken, the earliest opportunity at which it may now be implemented, and from round the wicket turned his third delivery in to trap Pietersen plumb lbw for 26.

Cook and Trott, not the ideal pairing in the middle of an ODI innings for some England followers, recorded the 100 in the 23rd over and added 49 before Trott got a thin edge trying to force a flat-footed drive.

Another sparse afternoon crowd was given little in the way of genuine excitement in the middle overs as both teams appeared content with a steady trickle of runs.

"England's 250 was par for the course, I felt they were playing towards that 250 and anything over would be a bonus. Alastair Cook had another splendid innings, he looked in total control and looked unrecognisable from the Test series. He was hitting everything off the middle of the bat, he'll be thinking why he didn't do that when England only needed 140 in the Test here."

England accumulated 38 without loss in the batting powerplay, so often an area of dramatic failure, a stylish drive to the cover boundary from Bopara bringing up the fifty partnership from 60 balls.

Cook moved into the 90s with an unusual short-arm jab over the in-field for four and reached his fourth ODI hundred in the next over.

After the skipper's departure in the 41st over Eoin Morgan showed glimpses of a return to form with a six over mid-wicket as a third half-century stand was compiled, this time from 51 balls, although given the amount of wickets in hand, 58 from the last 10 overs might have been improved upon.

Pakistan had lost four wickets inside the first nine overs but played the mandatory powerplay overs watchfully, and before a burgeoning, excitable crowd under the floodlights, built a useful platform.

Having reached 61 after 15 overs they lost Mohammad Hafeez, who tamely chipped James Anderson to mid-wicket at the start of the bowling powerplay, though after 21 overs were only run behind England's score at the same point.

Farhat was dropped on 40 by wicketkeeper Craig Kieswetter but wandered out of his crease and was run-out by an alert Stuart Broad in his follow-through.

The 100 was reached from the final ball of the 23rd over, although Samit Patel trapped Younus Khan (5) lbw sweeping and struck again with a quicker one to bowl Azhar Ali, who had played stylishly for 31.

"I think this team can do anything, we can come back at any time. I believe in my team, and if we can improve a little more in the next game we'll see what the result is."

There were still shotmakers to come, and the feisty Umar was not afraid to charge the quick bowlers, or to have a spirited word in response as the atmosphere intensified.

With 81 needed from 72 balls Misbah was given not out when moving across his stumps to Finn and though England were convinced it was lbw and reviewed, the verdict was umpire's call and the resulting four leg byes stood.

More controversy followed in the next over, Patel claiming a fine low catch at cover, Umar convinced the ball had bounced, but given out after replays for 21.

That brought crowd favourite Shahid Afridi to the crease with 72 required from 67 balls. He survived a difficult chance to Broad at long-off to hit 10 in two balls off Patel, before a swipe at Anderson saw his timbers shattered, the England seamer returning a key wicket maiden.

Abdur Rehman used up 12 deliveries for only a single, Misbah was superbly caught by Kieswetter running back and Finn wrapped things up with some fine yorkers, collecting identical figures of 4-34 from 10 overs and one maiden as England head to Saturday's third match in Dubai in fine fettle.