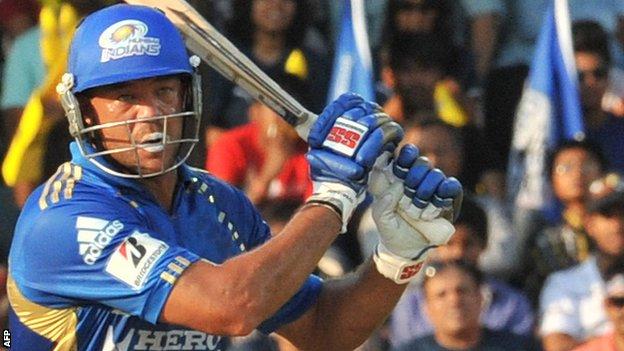 Symonds, 36, was contracted to play for the Mumbai Indians in the forthcoming Indian Premier League season.

The Birmingham-born cricketer, who played 26 Tests for Australia, terminated the deal for family reasons.

"Effective immediately, I am retiring from all forms of professional cricket," said the former English county player.

He added: "Mumbai Indians and the IPL have been very supportive, but the arrival of my first child is a priority."

It has brought to an end a career marked by big hitting in the limited-overs game. He played a key role in the victorious World Cup campaigns of 2003 and 2007.

While knocks such as his 143 not out registered against Pakistan in the 2003 tournament highlighted his one-day play, he struggled to repeat this form in the Test arena where he featured just 26 times and failed to secure a regular spot between his debut against Sri Lanka in 2004 and final appearance against South Africa in 2008.

Symonds was also sent home from the 2009 World Twenty20 tournament in England for disciplinary reasons, which signalled the end of his international career.

He returned to the country of his birth to play for county sides Lancashire, Surrey, Kent and Gloucestershire, and was last contracted to play domestic cricket for Queensland before he quit the side prior to the 2010-11 Big Bash competition.