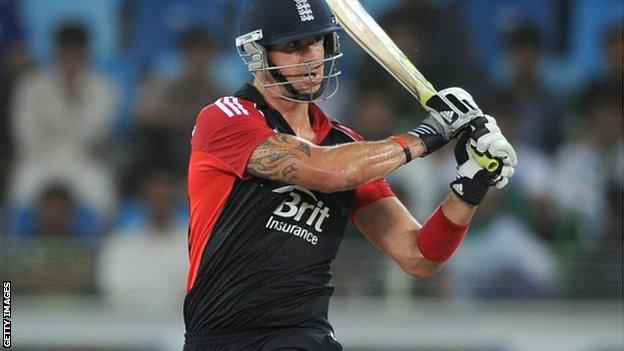 England took an unassailable 3-0 lead in the four-match one-day international series with Pakistan following an emphatic nine-wicket victory in Dubai.

Kevin Pietersen, who averaged 11 in the Test series, hit two sixes in 111 not out, his first ODI hundred since 2008.

As quickly as England's confidence began to evaporate in the 3-0 Test whitewash earlier this month, their complete dominance of the one-day matches has reduced Pakistan to a team bereft of answers.

It also continues a timely return to form for the limited overs team following their 5-0 whitewash in India late last year.

Cook, combining touch with controlled power he was once thought not to possess, looked certain to become the first England batsman to score three successive ODI hundreds but got a thin edge behind off Saeed Ajmal.

The renaissance of Pietersen, who had scored only 107 runs in eight international innings on the tour, is a significant bonus, and after successive half century stands he took his fledgling partnership with Cook at the top of the innings to new heights.

Simon HughesBBC Test Match Special commentator
This is quite an extraordinary turnaround from the Test series. England have got the measure a bit more of the conditions and one critical factor is that Ajmal, the tormentor of the Test team, can only bowl 10 overs, plus he's been bowling a lot in the powerplays to try to keep the runs down. Batsmen don't have men around the bat like you do in Tests, and so the batsmen who felt under pressure don't feel so caged up here

For once Cook lost the toss but his star fast bowler Steven Finn quickly put England in command.

Finn, who had taken 4-34 in both the first two matches, again displayed an exemplary line and length, collecting 2-14 from his first six overs, drawing Imran Farhat into an edge and trapping Mohammad Hafeez lbw with a full delivery that nipped back.

Stuart Broad's spell began in horrific fashion, spraying short and wide, and four boundaries came off his opening over, including one from a free hit following a no-ball which denied him the wicket of Hafeez when he had been caught at backward point.

Three wickets fell in as many overs, Broad finding far greater reward when pitching the ball up and forcing catches behind and at slip.

A partnership of 47 from 67 balls revived the innings but the fifth wicket fell when replays showed Asad Shafiq's bat was in the air as he dived for the crease after being sent back.

That brought in Afridi in the 22nd over and one more wicket could well have sparked a rapid end to the innings.

The severity of the situation did not affect the former skipper's approach, and he played his usual array of outrageously cavalier strokes, although not always making contact.

Such was the crowd's desire to see their hero they cheered on the rare occasions he chose to play defensive shots but he quickly found his touch and launched Graeme Swann for a gargantuan six down the ground as the fifty stand came up in 68 balls, Afridi's contribution 32.

The purposeful Umar took advantage of a dropped catch by unpredictable wicketkeeper Craig Kieswetter when on 28 - much to the chagrin of Broad - to provide the ideal foil for the charismatic Afridi.

England brought back Finn to break the partnership during the batting powerplay but Afridi took the only boundary off the giant fast bowler with a lofted drive.

It was a sensational catch that made the breakthrough in the 40th over.

Samit Patel belied critics of his physique to swoop superbly at mid-wicket and scoop up a looping chance one-handed millimetres from the turf to dismiss Umar.

Much to the dismay of the crowd Afridi succumbed in the next over, bowled through the gate and off the pad trying to whip James Anderson through the leg-side.

Finn returned to collect his third wicket, his 11th of the series, and though Umar Gul hit two sixes Pakistan's total looked inadequate, which was borne out by the fluent start to England's reply.

Gul sent down a 10-ball over and was pulled for six by Cook as England raced to 40-0 from five overs, prompting Pakistan to turn to spin.

Cook and Pietersen continued in positive vein, however, and recorded their third successive fifty partnership, with 60 scored in the first 10 overs.

Pietersen, beginning to return to his swaggering best, danced down the wicket to smash Afridi over his head for six and the century stand arrived in 102 balls.

He was reprieved on 45 when Azhar Ali spilled a routine chance in the deep but passed 4,000 ODI runs with a magnificent straight six and was soon clipping the ball through mid-wicket and driving on the up in vintage fashion.

Despite the loss of his captain in the 29th over, Pietersen ended a run of 36 ODI innings without a hundred and England will look to complete a 4-0 whitewash when the series concludes on Tuesday.