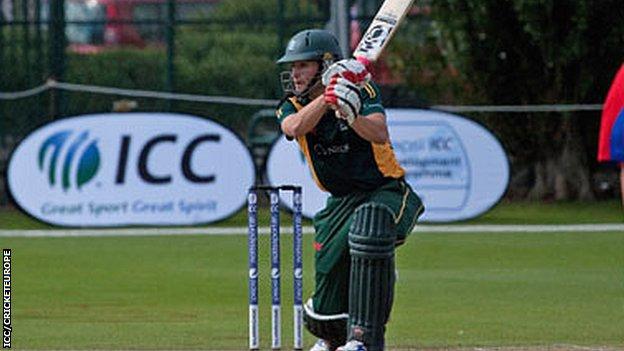 David Hooper took 3-28 as Guernsey secured a victory that sees them stay third in the group ahead of Wednesday's match with leaders Malaysia.

Guernsey recovered after being 37-3 at one point after Andy Biggins had been bowled out for a first-ball duck, GH Smit went for 16 and Tim Ravenscroft failed to score.

But skipper Stuart Le Prevost helped to steady the ship with 22 before man-of-the-match Kneller and Ferbrache put on 89 for the sixth wicket.

Guernsey's bowlers struck regularly as they cruised through the Argentine line-up with only opener Grant Dugmore offering any real resistance with a knock of 42.

"We lost a few early wickets so we were in a little bit of trouble," Kneller told BBC Guernsey.

"Myself and Stuart Le Prevost had to knuckle down and lay a bit of a platform for the rest of the innings..

"It was one of those days where I felt in really good touch but I was just more concerned that as a team we could get a good score for the bowlers to defend later on, we wanted a high enough score to not leave us in a bad position for Duckworth/Lewis."

Guernsey's next opponents, Malaysia, are a team they beat twice on their way to winning the Division Six tournament last September.

"They're a very good team, but we've beaten them in the past two games but that's nothing to take on, we're going to go into the game with a totally clean slate," added Kneller.

"If we can beat them it will stand us in good stead to qualify for the next league."