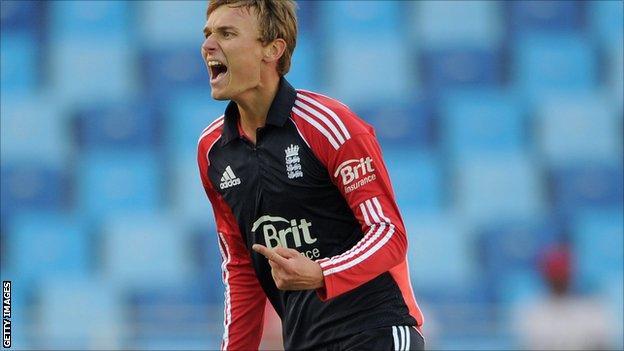 Briggs, 20, ended with bowling figures of 2-39 to help England to a four-wicket win, and a 4-0 series whitewash.

He became the first person from the Isle of Wight to appear for England and the youngest Hampshire player to represent his country.

"It's what you dream off to play for your country," Briggs told BBC Sport.

Briggs has been the Royals' leading Twenty20 bowler for the last two seasons, also topping the Championship tables for the club last summer.

He inherits the youngest player mantle from Chris Tremlett, who first turned out for his country while at Hampshire, aged 23.

Briggs got his first England Lions and England Performance Programme call-ups last winter where he impressed on tours to Australia and the West Indies.

He took more than 50 wickets in the two combined tours and was rewarded with selection for the full England squad for two T20 Internationals against the West Indies in September, though he did not play.

He has since enjoyed two more highly successful Lions tours of Bangladesh and Sri Lanka earlier this winter, taking 16 wickets in two one-day series against home 'A' squads.

"I loved it, it was great to get out there and be part of the England set-up. It was really good fun," Briggs told the BBC's Test Match Special.

"I loved every minute of it and it was a great experience to be out there playing and just to get the opportunity to do is great."

Briggs had the first wicket of his career when Umar Akmal mistimed straight to long-off. He proved the merit of his tight lines and full length when he had Shoaib Malik lbw sweeping, to end a stand of 58.

"To get an international wicket is a great achievement and hopefully it will continue," he added.