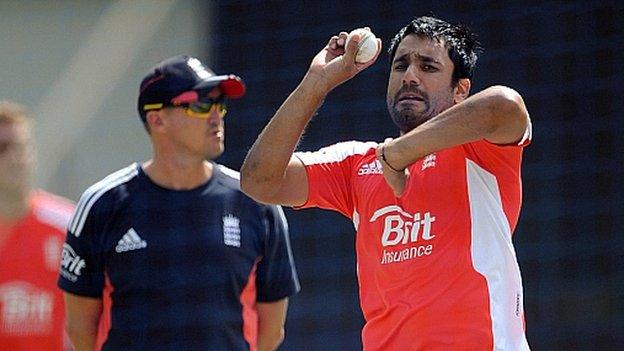 England will wait until the morning of the match to decide whether Ravi Bopara is fit to play in Thursday's opening Twenty20 international with Pakistan.

Bopara missed Tuesday's fourth one-dayer with a back injury after scoring two fifties earlier in the series.

"Ravi was a bit sore yesterday so we'll have to see how he pulls up tomorrow," captain Stuart Broad told BBC Sport.

Alastair Cook, called up to the squad on Tuesday, will only play if another player gets injured, Broad confirmed.

Bopara, who has played 16 Twenty20 internationals, batted and bowled in the nets on Wednesday to give his back a working over.

"Hopefully he'll be fit because he's been in great form so far," added Broad.

Should Bopara fail to prove his fitness, Cook may get the chance to prove he can translate his sensational one-day form to the Twenty20 game.

"Cookie's keen to play Twenty20 cricket," said Broad. "He's a confident batter at the moment, he's worked on his game in the one-day format and he's a good character to have around.

"But he'd only play if there was an injury because he wasn't in the original squad."

England must decide on whether to deploy Kevin Pietersen as an opener after the batsman scored back-to-back hundreds in that role in the third and fourth one-dayers as England completed a series whitewash.

"KP has played fantastically well," said Broad. "With back-to-back hundreds you can't doubt he's thrived in that role so [opening] is a possibility.

"But we have a couple of injury doubts looming over us at the moment so we're waiting to see how they pull through to decide balance of the side. The decision will stay in house until the game commences."

England have seven matches in the game's shortest format to settle on a winning formula before they arrive in Sri Lanka to defend their ICC World Twenty20 crown.

And Broad is confident that England have the ingredients to remain successful.

"I look through the squad, and it excites me," he said. "Of the guys who've come into the side in recent times, Jos Buttler's won game after game for Somerset; [Jonny] Bairstow strikes the ball beautifully, as we've seen on the international stage; Jade Dernbach's got a brilliant yorker and a great slower ball.

"We've got guys coming into the Twenty20 team and offering a huge amount. It's exciting going on to the field, knowing you have that trust in your guys to perform.

"That's what it's about - and as long as players know their roles, and what's expected of them, they have enough talent to be able to produce that on the field."