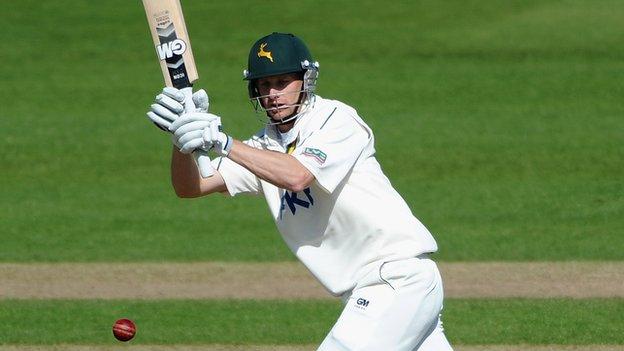 Australian batsman Adam Voges has agreed a return to Trent Bridge for a four-month stint with Nottinghamshire.

The 32-year-old, who first joined Notts in 2008, has already enjoyed three spells at Trent Bridge.

Notts director of cricket Mick Newell told BBC Radio Nottingham: "We like working with people that we know here.

"We have a good relationship with Adam over the years and his availability for the majority of the season was a strong decision to sign him."

Voges, who has played 15 one-day internationals for Australia, helped Notts win the County Championship in 2010 and last summer expressed his desire to return to Trent Bridge.

The Australian will be available for the County Championship match against Sussex at Hove from Friday, 25 May and will remain with Notts until the end of the season.

"Adam has been very dependable for us in recent seasons," added Newell. "He'll come into the side around the time we expect to lose the likes of Samit Patel, Alex Hales and James Taylor to international duty."

Newell approached David Hussey and VVS Laxman with a view to filling the overseas slot from the start of the season, but the availability of Michael Lumb, who will be on standby for the IPL rather than travel to the tournament, has effectively ended the search for an additional signing.

"Michael will be available to us for longer than we expected given that he doesn't expect to feature in the Indian Premier League," continued Newell.

"I've got a clear idea as to where Michael Lumb, Alex Hales, James Taylor and Samit Patel will fit into the batting order and it's up to Neil Edwards, Riki Wessels, Karl Turner and Steven Mullaney to make a claim for the remaining places.

"Our tour of Barbados will have a big impact on the make-up of our team and I expect to name the same team for our game against Loughborough University as the one that will face Worcestershire in our first competitive match."