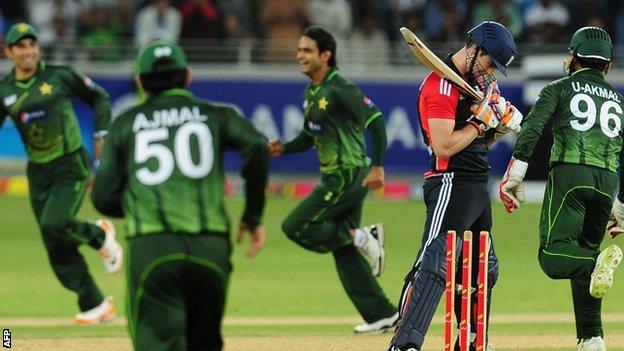 Pakistan fought back to inflict an eight-run defeat on England in the first of three Twenty20 matches.

Their stand proved crucial as England's batsmen fell just short in a tight run chase under the lights at the Dubai International Cricket Stadium.

England retained Pietersen at the top of the order where he had been so successful in the one-day series whitewash and brought back Bopara after a back injury, leaving out Alastair Cook.

Pietersen looked to dominate from the start and England, despite a maiden over from Gul, cruised to 40-0 after five overs.

But Pietersen, having flat-batted a powerful six to the previous ball, was out for 33 in the sixth over when Asad Shafiq took a well-judged catch right on the boundary edge off Shahid Afridi's bowling.

Craig Kieswetter was bowled trying to make room for a big hit and Eoin Morgan went for 14 to off-spinner Mohammad Hafeez's quicker ball.

The Essex batsman smashed a straight six off Junaid and kept the scoreboard ticking along before walking across his crease and being bowled behind his legs by a Gul yorker.

Jos Buttler, having also stepped across his stumps in an attempt to flick Gul away, fell to a one-handed catch by Ajmal for three, and next ball Samit Patel was trapped leg before playing across the line of an inswinger as the pace bowler took two wickets in two balls.

Swann and the inexperienced Bairstow struggled to get the ball away, with spinner Ajmal conceding only four runs off the penultimate over to leave England needing 18 off the final over.

But left-arm seamer Junaid kept his discipline and ensured his side broke their losing run.

Earlier, Pakistan opener Awais Zia gave his side a bright start on his debut, hitting two powerful boundaries off Steven Finn's first over and then smashing the paceman for a six into the second tier of the stand in his next over.

Finn got his revenge with a well-disguised slower delivery which Zia lofted into captain Stuart Broad's hands for an easy catch at mid-off.

Swann dropped Hafeez off another slower delivery, this time from Jade Dernbach, but the spinner's second over halted Pakistan's momentum.

Swann got lucky with the dismissal of Shafiq when it looked like he had already broken the wicket with his elbow before claiming a run-out, as four wickets fell for eight runs.

Two balls later, Hafeez swept Swann straight to Bairstow and in the next over, Swann tempted Afridi down the pitch and the batsman flicked the ball straight to Morgan at mid-wicket.

Umar Akmal faced three balls before hoicking Swann horribly and Dernbach raced in to take a superb diving catch and hand the bowler a double-wicket maiden.

Malik and Misbah batted sensibly to get their side back into the match, both smashing a six each as Pakistan built their total.

They put on 71 before Malik was out to the last ball of the innings trying to hit Dernbach over the ropes but their partnership ultimately made the difference.