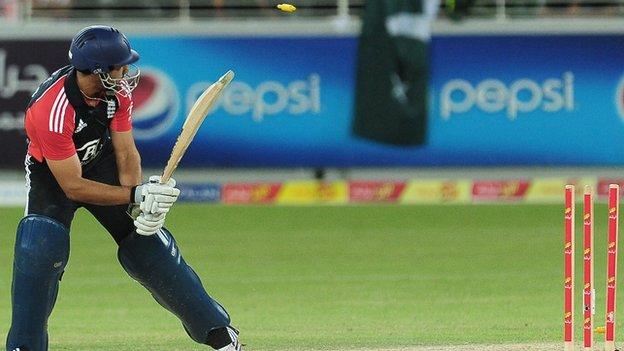 England captain Stuart Broad was disappointed to see his team throw away a winning position in Dubai in the first of three Twenty20 internationals.

"As a team you would back yourself to score 144 against most teams," Broad told the BBC's Test Match Special.

"We just didn't manage to get over the line when we should have done."

With Ravi Bopara (39) established at the crease, England looked to be cruising to victory as the match entered its final phase.

But Gul struck to bowl Bopara round his legs for 39 and followed up with the wickets of Jos Buttler and Samit Patel from successive balls in his next over to turn the match around.

The turning point was Ravi Bopara's wicket. The way he was going, the game was over for us.

"There was a period where Ravi was going nicely and it looked like we were in a really strong position, only needing seven an over from the last five.

"Then Umar Gul came on and bowled a fantastic spell with a bit of reverse swing and won the game for them."

Broad defended the decision to drop himself down the order and promote Graeme Swann above him to number eight, a move which backfired as Swann could only muster two runs from the seven balls he faced at the death.

"Swanny is quite a dangerous hitter at the end," Broad said. "He hits the ball in dangerous areas and is probably more of a boundary clearer than myself.

"He was sent in to try to up the rate at that stage and then maybe I could come and finish it off if we got close."

Pakistan captain Misbah-ul-Haq was delighted to see his team return to winning ways after a 4-0 whitewash by England in the one-day internationals series.

"Whenever another team dominates you, you feel down," said Misbah, who captained his side to a 3-0 clean sweep in the Test series that preceded the one-dayers.

"England totally outclassed us in the one-dayers and it was a wonderful performance today to get some confidence back.

"The turning point was Ravi Bopara's wicket. The way he was going, the game was over for us.

"That was the key. They kept the pressure on, and finally they just won the game for us.

"Gul really bowled very well. There was no answer to his bowling today."